Many of the cases in 2021 involved high ranking officials, both incumbent and retired, and general-level officers, including 10 cadres under the management of the Politburo and Secretariat. 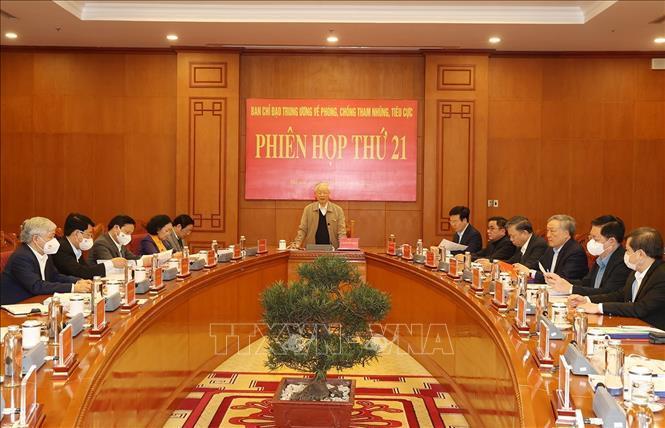 The Central Inspection Committee focused on inspecting signs of violations by party organizations and members related to cases under the supervision of the Steering Committee. The Central Committee, Politburo and Secretariat disciplined many high-ranking cadres who committed violations related to corruption and wrongdoings, including 32 cases under the management of the Politburo and the Secretariat, an increase of 15 cases over 2020.

Inspectors and auditors recommended to take back VND 81.290 trillion and 811 hectares of land; and proposed administrative handling of 2,286 collectives and 6,132 individuals.

Many large-scale inspection campaigns were carried out, including inspection of the use of the health insurance fund, the procurement of medical equipment and materials, and bidding for medicines; and the observance of laws in the management and use of land at three economic groups and general corporations.

After the inspection, auditors transferred more than 330 cases to investigation agencies which have signs of violations, three times higher than 2020. Information and documents about high-ranking central cadres violating the laws were transferred to the Central Inspection Committee for consideration and handling.

Filing of charges against 10 officials under management of Politburo, Secretariat

The year 2021 saw the filing of charges against 1,011 suspects in 390 cases for embezzlement and power abuse.

Many large, serious and complicated cases have received charges, while investigations have been expanded to clarify the nature of embezzlement and wrongdoings in many cases. Many suspects in the cases are high ranking officials, both incumbent and retired, and general-level officers, including 10 cadres under the management of the Politburo and Secretariat

The case of giving and receiving bribes related to Phan Van Anh Vu, some cases in the healthcare sector, and cases in Dong Nai, Binh Duong, Khanh Hoa, HCM City and An Giang have been investigated and strictly handled.

Regarding the recovery of assets lost and appropriated in criminal cases, appropriate agencies have taken back, seized and distrained assets, blocked bank accounts, and prevented transactions of assets worth over VND15,000 billion and many other valuable assets.

As for cases under supervision of the Steering Committee, since 2013, over VND31 trillion have been taken back (33.33 percent). Of this, more than VND9 trillion was seized in 2021 alone, an increase of VND7.1 trillion over 2020. Particularly, 2.7 million US dollars and 127,000 Singapore dollars overseas of Phan Sao Nam have also been taken back.

The investigative agency of the Supreme People’s Procuracy filed charges against 31 suspects in 26 cases for embezzlement, power abuse and wrongdoings in judicial activities.

There have been positive changes in the detection and handling of corruption cases in localities: in 2021, all 63 cities/provinces filed charges for new corruption cases. Many localities have investigated and handled many serious and complicated corruption cases that attract the attention of the public, including Dong Nai, An Giang, Khanh Hoa, HCM City, Phu Yen, Hanoi and Son La

In the closing speech, Trong emphasized that the anti-corruption fight continues to be promoted, gaining clear achievements, which shows the Party and the State’s strong determination to fight against corruption. The fight was never interrupted because of Covid-19.

The investigation, prosecution and trial continue to be implemented with no restricted zones and no exceptions.

Party General Secretary Nguyen Phu Trong urged breakthrough changes in corrupt asset evaluation and recovery in 2022, as he chaired the 21st meeting of the Central Steering Committee for Anti-Corruption on Thursday in Hanoi.