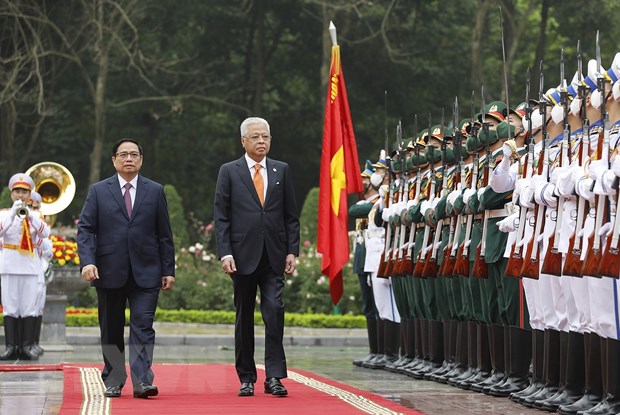 Malaysian Prime Minister Ismail Sabri Yaakob was welcomed by his Vietnamese counterpart Pham Minh Chinh in Hanoi on Monday morning, as part of his official visit to Vietnam on Sunday and Monday.

PM Yaakob and a delegation of high-ranking Malaysian officials landed at Noi Bai International Airport in Hanoi on Sunday afternoon to commence his visit at the invitation of PM Chinh.

During the welcome ceremony on Monday, the two government leaders exchanged warm greetings and reviewed the guard of honor, the Vietnam News Agency reported.

They joined talks at the government headquarters following the ceremony.

This is PM Yaakob’s first official visit to Vietnam after taking office in August 2021.

The visit aims to further strengthen the bilateral relations and synergy between the two countries after the COVID-19 pandemic.

This is also an opportunity for both sides to promote trade and investment cooperation.

Vietnam and Malaysia formed their diplomatic relations in 1973 and established a strategic partnership in August 2015.