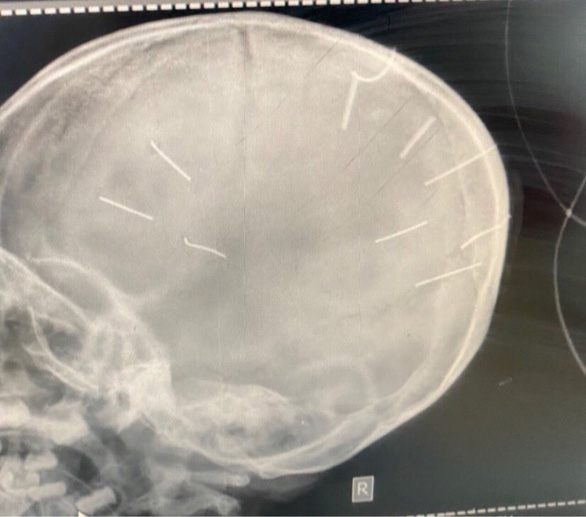 This supplied photo shows an X-ray film indicating nine nail-like objects inside the skull of a three-year-old girl hospitalized in Hanoi, Vietnam.

Police in Hanoi have launched an investigation into a three-year-old girl being hospitalized with nail-like objects in her skull, an abnormal case suspected to have resulted from abuse.

Her mother took the little girl to Thach That District General Hospital on Monday afternoon in a coma and convulsions, with her right arm already in a plaster cast, Dr. Vuong Trung Kien, director of the hospital, told Tuoi Tre (Youth) newspaper.

An X-ray scan of her head later showed nine objects that looked like nails in her skull, Dr. Kien said.

“Noticing such unusual signs, we reported to the district’s police,” the director said, adding that local police officers have summoned a number of related people for inquiry to clarify the case.

An investigation is underway to determine whether the girl was a victim of child abuse, according to Cong An Nhan Dan (People’s Police) newspaper.

As the patient was in critical conditions and at high risk of mortality, doctors decided to transfer her to Hanoi-based Saint Paul General Hospital for further treatment.

By Tuesday evening, the girl had remained in severe conditions at the hospital, Voice of Vietnam (VOV) reported.

Three months ago, the girl was hospitalized for treatment of pesticide poisoning, and a few months later, she was admitted to hospital again for removal of a foreign object in her digestive tract, Dr. Kien said, citing the girl’s medical history.

Her right arm broke two weeks before being taken to the Thach That Hospital.

Six days ago, the patient had an earache and was given medicine by her family. Two days later, she vomited several times.

The girl vomited again and began to fall into a coma around 30 minutes before her hospitalization.

The youngest child of the three children of a couple who have divorced, she has lived with her mother after their break-up, according to VOV.