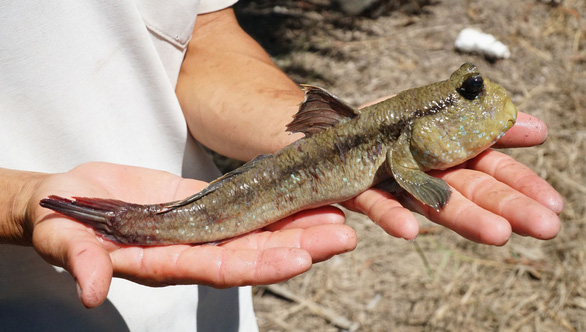 For residents in Ca Mau, the southernmost province of Vietnam, the giant mudskipper is the weirdest fish because it can both swim and walk.

The fish has become a popular specialty in fancy restaurants, but farming it is not an easy feat.

His personal feat of taming the ferocious giant mudskippers has turned into quite a rural legend.

The giant mudskipper in Ca Mau Province is a unique feature of the mangrove forest ecosystem there.

It has been recognized among the weirdest creatures in the world by international scientists.

The fish can dwell in both saltwater and freshwater. They can even walk on land looking for food.

According to Vo, Ca Mau people often refer to this kind of fish as ‘the tree climber’ or ‘the land jumper,’ or even ‘the ugliest fish.’

However, the giant mudskipper is associated with the process of land expansion in this province.

The further the alluvial expands into the sea, the fewer giant mudskippers are seen.

For ages they have lived peacefully in nature and have received little attention from humans because other specialties were more popular.

Until recently, diners have remained reluctant to try out this odd-looking fish.

At one point, however, the giant mudskippers went straight to the top of the list for restaurant specialties.

Although they are available far and wide, only in Ca Mau can one find giant mudskippers that are both tasty and large in size.

According to Nguyen Van Hon, a homestay hotel owner in Ca Mau, it has become extremely difficult to find this kind of fish because everybody wants a bite of it.

Those involved in the homestay business have tried out purchasing the giant mudskippers and raising them in their own premises, but the results have not been positive.

From the accounts of Nguyen Van Nhuan, an experienced farmer in Con Mui Commune, Dat Mui Ward, he tried raising some large-sized fish.

“They were fierce and always fighting. The weak ones got killed instantly,” he said.

“Some of them refused to eat so they ended up underweight. To be honest, it’s too challenging trying to raise this fish species.”

Yet, Vo was determined to succeed in farming them.

“At first I kept a small pond just for fun,” he said.

“Later on, I noticed that the fish became more confident around people, and they got smart and grew in size.

“They gathered around immediately every time I fed them so I decided to make a business out of this.”

It was not a simple story, though.

From Vo’s understanding, the giant mudskippers have a strong personality and a powerful sense of territory, which explains in-group fighting if these are kept together.

Additionally, the fish tend to escape their living habitat if it is not the right environment for them, however well fortified the ponds may be.

A special feature, however, is their reservation around human presence.

They skip meals in the face of people and therefore die from hunger.

After many trials and errors, Vo ended with the solution of partitioning the farming area.

The parent fish would be raised first until they were used to their human caregivers, after which they were put together.

Once they have grown more sure of themselves and are ready to dig their own caves, they do not leave their habitat.

Thanks to the feed, the giant mudskippers tend to fight less and their occasional violent encounters get less ferocious.

Talking about their violent behavior, Vo gave a laugh, saying “these legged fish are just like the people in Ca Mau.

“We are proud, quick-tempered and extremely straightforward.

“During a fight, a giant mudskipper will raise its fins and roll its eyes, while its scales change into an overwhelming color.

“But when there is enough space for everyone and they have got used to each other, there will be minor disputes only and fatal fights become quite rare.”

After a lot of failures, Vo finally made a name for himself when he managed to raise giant mudskippers.

People from other districts and provinces consider this a strange story.

The quality of his products is quite high because the food source remains the same for those in the wild even though the eating habit is changed.

They look firm in their flesh and skin, and appear considerably larger in size, which leaves an insatiable appetite for first-time eaters.

Vo’s own family farm hosts thousands of giant mudskippers, which appears similar to a mini ecosystem.

“I often give these fish away as gifts to those who enjoy them,” he said.

“Mostly, I keep them for fun because I get to relax watching them after work.

“To me, they are the strangest saltwater fish of all, but they are not ugly at all.”

Going big with the legged fish

With eight hectares of shrimp farm, Vo has no problem making a living for himself and his family.

But this financial stability does not quench his thirst for a sense of novelty.

Over the years, he has tried growing different trees and fruits and keeping different animals, including white herons that are quite friendly to human visitors.

Near his farm is the Bird Sanctuary of Dam Doi, in which there is a massive forest.

“The birds and the herons used to roam the sky. You could easily grab some of the eggs simply by rowing your boat in there,” he said.

“But now the forest has been depleted and the bird population has dwindled.”

Regarding his business plan with the giant mudskipper, Vo intends to allocate one hectare of farmland near a national road to serve as a rest stop for travelers.

This rest stop will provide a place for tourists and travelers to watch mudskippers. They can sign up to fish these mudskippers as well.

“I will add the products from my own farm, too,” he said.

“That’s a sustainable and easy way to make money.”

Vo added that he was not keen on schoolwork, but he had a huge passion for birds and fish in his secondary years.

He quit school and began working after ninth grade and has done all kinds of jobs, which offered him both joy and income.

Some of the jobs he has done include burying poles deep in river beds, collecting wild bees and fishing eels.

“The giant mudskipper is the fish I like the most,” he said.

“The more difficult it is, the more determined I am to raise them.

“Now they have become a specialty so there is no worry about the output.”

Those who see the fish farm at Vo’s place will truly understand his level of creativity and the amount of effort he has put into raising mudskippers.

The man calls the fish his ‘children’ every time he feeds them, as if he could remember each single one of them and their exact cave in the whole pond.

His fish are quick to snatch the food off their feeders’ hands without a sense of reservation, an unprecedented sighting in the whole of Ca Mau.

“The cost to buy giant mudskippers is around VND100,000 [US$4.35] a kilogram, with about seven specimens,” said Nguyen Van Hon, owner of the Hoang Hon rest stop in Ca Mau.

They are a much-loved delicacy and can be the ingredients for over ten different dishes.

The giant mudskippers from Ca Mau are exported to neighboring provinces via road transport.

Their prices rocket when they are sold in restaurants in major cities.