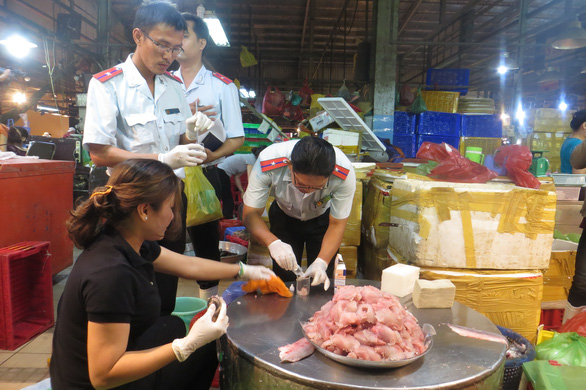 Nearly 50 percent of the tested vegetable and fruit samples taken from wholesale markets in Ho Chi Minh City were found to contain chemical residues, while heavy metals were detected in over 40 percent of the seafood samples there.

Notably, a product was discovered with residues of seven active elements.

The information shocked many consumers who thought that food was managed more strictly.

At a recent conference to review the six-year operation of the Food Safety Management Authority of Ho Chi Minh City (FSMA), the authority reported that it sampled products of the ‘Safe Food Chains’ program for testing.

The authority found that many samples contained plant protection drugs and residues of such drugs, which are not allowed to be used in food.

The agency detected different types of active drugs in many of the products, with one sample even containing seven types.

In general, plant protection drug residues were spotted in 271 out of 570 samples of vegetables and fruits, and the remains in many products were beyond the permitted levels.

As for wild-caught seafood, the cadmium levels in 42 samples, including 36 squid samples and six octopus specimens, out of the 100 pieces exceeded the thresholds.

As for farm-raised seafood, antibiotics banned from use, including ciprofloxacin, enrofloxacin, and trifluralin, were detected in 37, 49, and five, respectively, out of a total of 100 samples.

“Publicizing the proportion of food contaminated with banned substances and plant protection drugs shows our determination to control the food quality,” said Pham Khanh Phong Lan, head of the FSMA.

“Sampling, testing, and publicizing the testing results are needed to know the actual situation and work out solutions.”

According to the FSMA, the management and use of plant protection drugs in vegetable and fruit farming, especially in provinces, have improved but remain inefficient as farmers’ use of them have yet to be controlled.

About 70 percent of food in the city is supplied by traditional markets, mainly three wholesale markets, according to the Ho Chi Minh City Department of Industry and Trade.

Thu Duc Wholesale Market accepts some 2,500 metric tons of agricultural products per night, with 80-90 percent of the volume being locally produced.

Nevertheless, the number of samples taken from wholesale markets and slaughterhouses for testing remains modest compared with the total volume of goods, and the main testing method is rapid screening.

Nguyen Nhu, director of Thu Duc Wholesale Market, told Tuoi Tre (Youth) newspaper on July 16 that just a small volume of goods containing banned substances and plant protection drugs was sent for destruction at the market because authorities could test a minute portion only and the testing results returned after the sale thereof.

Lan from the FSMA admitted that commodity samples taken from wholesale markets for testing surged over the years but remained modest compared with the total volume.

The FSMA reported the testing results to traders whose products failed to meet the requirements, traced the origins of the products, and required an explanation from the traders.

Lan said that punishment could be imposed on the basis of intensive testing results, while rapid tests were aimed at detecting basic active substances only.

However, the FSMA is now unable to perform large-scale and intensive tests.

It can merely test high-risk and seasonal goods.

Moreover, it takes a long time to work out the results of each intensive test, while fresh food has a short usage life.

If the products retained for testing are rotten but no abnormalities are found, relevant agencies must compensate traders.

Meanwhile, if the products are not put on hold but they are later found to be problematic, it is meaningless as they may be sold out.

In this case, the management agencies may impose fines, trace the origins of the products or issue warnings at the most.

Lan said the traceability of products needs the cooperation of provinces.

In addition, the ministries in charge of food safety should issue regulations so that agricultural produce and food can be checked and certified before being put up for sale.

Food in the city is not yet completely safe but it is getting safer, the FSMA claimed.

Regarding products in the ‘Safe Food Chains’ program, up to 95.65 percent of them are free from chemical residues, while only 3.69 percent have the remains within the allowable limits, the FSMA said.