Prices at land auctions in the last months of the year have been climbing to new highs. 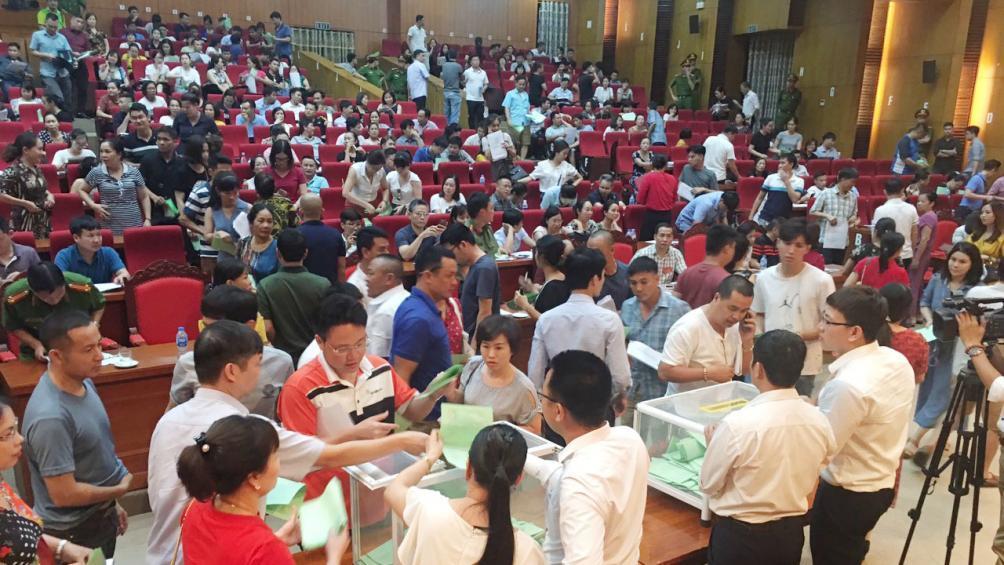 Many land auctions were held within a short time in localities and the winning prices were several times higher than the starting prices, which were already high.

The auction of 25 land plots in X4 area in Mai Dich Ward in Hanoi was organized with 800-900 participants. The starting price was very high, nearly VND200 million per sq m, but the winning prices were 2-2.6 times higher.

B12 land plot, 44.5 sq m, facing Duong Khue street had the highest starting price of VND182.3 million per sq m, while the winning price was VND364.3 million, nearly twice as much as the starting price.

The auction of 18 land plots in Quang Loc commune in Ha Tinh province attracted 100 registrants. All the plots were sold, bringing VND17.5 billion, or VND7 billion higher than the initially estimated amount.

Some land plots had the starting price of VND685 million and sold for VND1.3 billion.

In Bac Giang, the highest winning price at a recent land auction was VND8.3 billion, paid for the land plot with an area of 150 sq m, or VND55 million per sq m. Most land plots had selling prices higher by VND1 billion than the starting prices.

Most recently, the HCM City real estate market was stirred up by the news that the four land plots in Thu Thiem urban area were sold at VND37.346 trillion in total.

Ngoi Sao Viet Real Estate Co Ltd, a subsidiary of Tan Hoang Minh, paid VND24.5 trillion to acquire the 3-12 land plot, 8.3 times higher than the starting price. With the average price of VND2.4 billion per sqm, this land plot was among the most expensive in the world.

Meanwhile, the 3-5 land plot was sold to Dream Republic for VND3.82 trillion and 3-8 plot to Sheen Mega, VND4 trillion.

A financial expert said he could not understand why Tan Hoang Minh accepted to pay such a ‘mountain’ of money just to acquire a land plot.

If Tan Hoang MInh could borrow money equal to 70 percent of the asset value, or VND17.150 trillion, the group would have to pay trillions of dong a year in interest.

“I can explain the move of the realtor,” he said.

Analysts have warned of the problems caused by ‘surfing investors’, i.e. the ones who buy land just to resell for profit, not to develop projects. He said that the ‘surfing’ will leave negative consequences to the market and state management.

Once investors pay overly high prices, they will break the market prices and prevent investors who really want to develop projects from accessing the land. If the surfing investors finally change their plan and not pay money, this will affect the localities’ budget collection plans.

“The surfing investor may pocket a profit of VND50-150 million a plot,” he said.

Diep said that at some land auctions, investors collude with brokers to inflate the prices. They even hire people to come to the auctions and offer high bid prices to fabricate artificially high prices. The high bidding prices will push the local land prices up.

Meanwhile, VAR (Vietnam Association of Realtors) Chair Nguyen Van Dinh thinks the high prices of land plots at the auctions will create a new price floor in the market. If so, realtors will have to pay more to compensate people for site clearance, and the project development costs will also increase.

HOREA (HCM City Real Estate Association) Chair Le Hoang Chau has warned of the risks from the sky high prices, saying that the plan to stabilize the housing market in HCMC will fail completely as the land price has become more expensive. Realtors will find it difficult to find cheap land to develop affordable housing projects.

Chau believes the supply of low-cost real estate products, which is in short supply, will even be less, thus affecting market stabilization. The sky-high land prices will prompt realtors to develop high-end projects rather than affordable housing projects.

Meanwhile, some real estate experts warn that winners at auctions may later give up their bids, willing to lose their deposit money. This happened at a lot auctions this year in the districts of Tho Xuan, Quang Xuong, and Hoang Hoa in Thanh Hoa province, and in Lang Giang district of Bac Giang.

Lawyer Tran Vi Thoai from IB Legal Vietnam said that it was necessary to strengthen management and inspection in order to eliminate artificial fever in the real estate market.

Prime Minister Pham Minh Chinh has assigned the Ministry of Finance (MOF) to study and design some kinds of tax related to the real estate market, including property tax, in order to stabilize the market and reduce speculation.

One of the businesses participating in a bidding session on December 10, 2021 had to pay VND2.4 billion per one square meter to obtain a land plot in Thu Thiem new urban area. The sky high price has raised worries rather than joy.