The auction of four land lots in the Thu Thiem New Urban Area in HCMC’s Thu Duc City has many loopholes, which may negatively impact the local real estate sector and the economy, according to the HCMC Real Estate Association (HoREA). 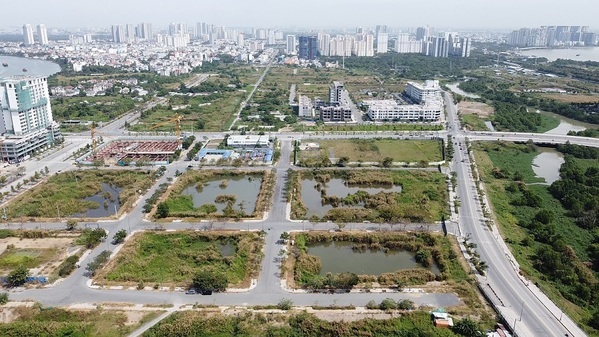 In a report on the impact of the land auction sent to the Government, HoREA suggested that prevailing regulations on the bidding for the land use rights should be amended, news site VnExpress reported.

Specifically, enterprises participating in auctions are now required to make deposits of 20% at the maximum of the starting prices of assets put up for auction. They are not asked to make commitments on the payment of the remaining amount or get a guarantee from credit institutions if they set prices much higher than the starting prices.

According to HoREA, this loophole is an issue of concern as many investors have failed to pay for the assets after winning auctions or dragged out the payment.

At the auction of the 3.12 land lot in the Thu Thiem New Urban Area, Viet Star Real Estate Investment Co., Ltd won the auction at VND24.5 trillion, 41.6 times higher than its deposit of VND588.4 billion.

Therefore, HoREA proposed the Government apply the regulations on the securities transaction management to land auctions. Accordingly, investors must get the guarantee or confirmation of banks approving their payment requirements.

Moreover, the process to assess the capability of investors participating in an auction remains lax. The 2016 Bidding Law does not include requirements that investors joining auctions for land use rights must prove their financial capacity and must not violate regulations on land use and management.

Due to the lack of these regulations, the Property Auction Service Center under the HCMC Department of Justice has issued regulations asking investors to make commitments in writing on their financial capacity and compliance with land-related regulations. However, the commitments make no sense.

In addition, penalties for enterprises that put land lots into use late remain light. Many investors have delayed putting land lots in prime sites into use, but no land lot has been taken back.

Therefore, State-owned land lots that are handed over to enterprises to execute projects must be put into use within a prescribed period of 12 or 24 months, HoREA suggested. Investors may have the land use deadline extended by 24 months, but must pay the land use fees and land rentals during the period. After 24 months, the State will take back the land lots without being developed.

The same loophole is also seen in the auction of the four land lots in the Thu Thiem New Urban Area.