Japanese-Vietnamese relations to strengthen during Year of the Tiger: Interview 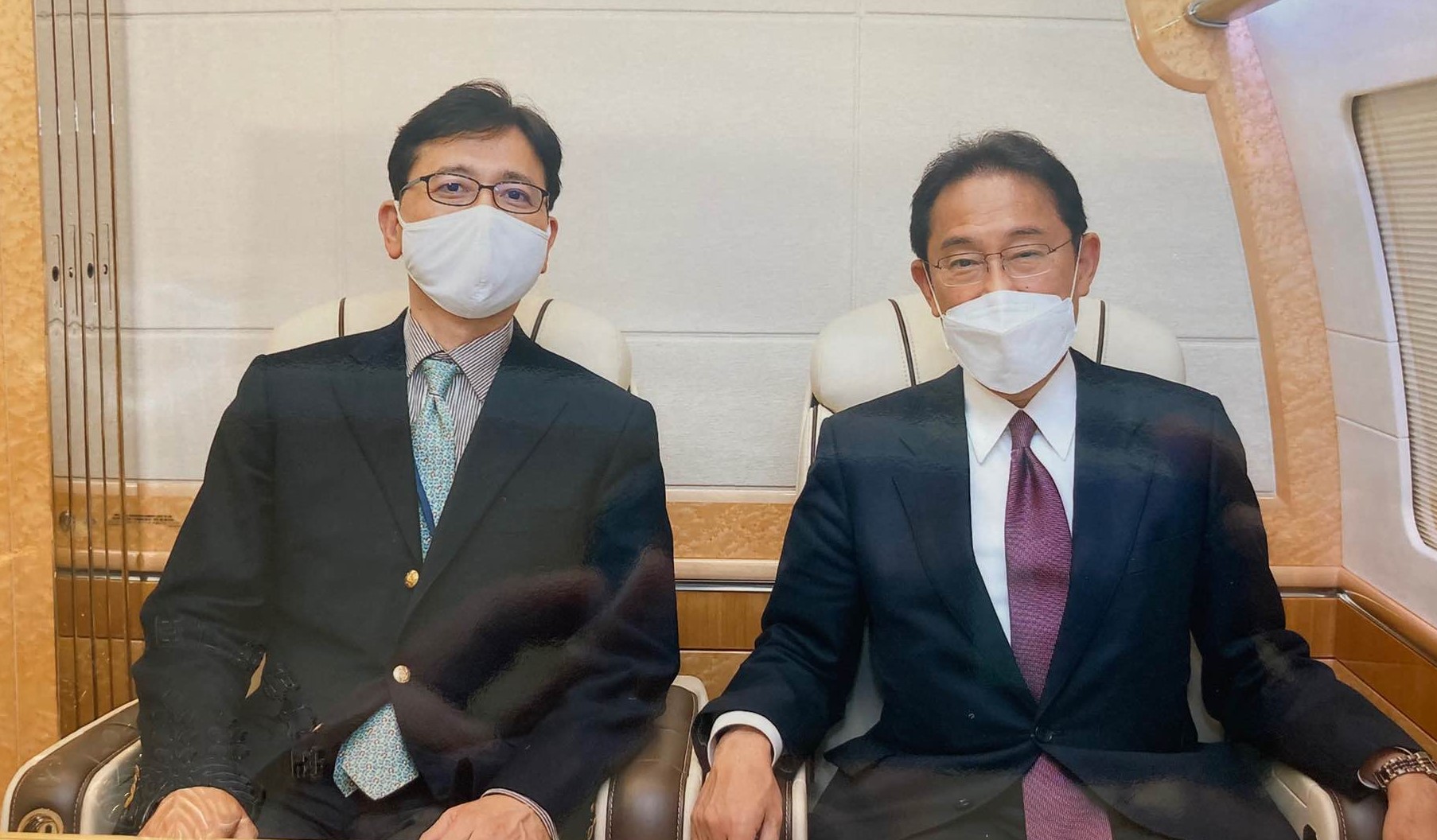 On the occasion of the Lunar New Year holiday, Noriyuki Shikata, cabinet secretary for public affairs at the Japanese Prime Minister’s Office, spoke with Tuoi Tre News about the areas where Japan-Vietnam relations are expected to flourish in 2022.

Noriyuki Shikata told about the economic, cultural, defense, and security partnerships between the two countries. He also discussed Prime Minister Kishida’s “new form of capitalism,” as well as the ways in which Japan plans to help Vietnam shift to green energy.

Looking ahead to the new lunar year, what do you expect our two countries to achieve in terms of economic, cultural, defense, and security partnerships?

On the occasion of the New Year, I would like to wish the Vietnamese people health, happiness, and the further development of Japan-Vietnam relations.

Last November, Prime Minister Kishida welcomed Prime Minister Chinh as the first foreign guest to visit Japan since the Kishida government came into power. “Vietnam is an important partner in achieving a free and open Indo-Pacific, and I am confident that Japanese companies in Vietnam and Vietnamese working in Japan will play an important role in the economic revival of both countries after COVID-19,” Kishida said during their meeting.

Looking ahead to the period after COVID-19, I would like to make 2022 a year in which we will deepen the ties between our two countries by realizing the cooperation affirmed by our two leaders.

Cooperation on measures against COVID-19 is at the top of our priority list. Japan, again, provided COVID-19 vaccines to Vietnam last month, bringing the total amount of vaccines supplied from Japan to Vietnam to nearly 7.32 million doses.

As for the economy, Japan will work hand in hand with Vietnam to achieve an economic revival after COVID-19. Japan will promote cooperation in digital transformation and supply chain diversification. Through the Trans-Pacific Partnership (TPP) and the Regional Comprehensive Economic Partnership (RCEP), both of which came into effect on January 1, Japan will strengthen its economic ties with Vietnam.

On the national security front, Japan deployed Ground Self-Defense Force officials to Hanoi for about three weeks s in December 2021 to help prepare for the Vietnamese Army’s participation in the United Nations Interim Security Force for Abyei (UNISFA) as part of an agreement made between our two heads of state in November 2021. I look forward to further strengthening defense cooperation between Japan and welcoming a new period of peace and stability for both the international community and the region.

Next year, in 2023, the two countries will celebrate the 50th anniversary of the establishment of diplomatic relations. In 2023, an opera named The Princess Anio will be performed. The opera is based on the story of a Vietnamese princess and a Japanese merchant who lived during the Shuinsen Trading Period, known in Vietnam as thoi Chau An Tuyen, during the first half of the 17th century. I hope this year will be a year of further mutual understanding and friendship between the Japanese and Vietnamese people through such cultural exchanges.

We face a number of challenges, including climate change, the digital transformation of society, a widening of the income gap and an increase in poverty, a chronic lack of medium- to long-term investment, inequalities between urban and rural areas, challenges to democracy due to a shrinking middle class, and unforeseen emerging tensions in geopolitics and geoeconomics.

Against this backdrop, the Kishida government will strive to lead the economy and society into a new era while protecting the universal value of democracy. In other words, the goal is the “Great Transformation of Liberal Democratic Society.”

To achieve this, government, industry, and labor leaders must work together to generate massive momentum and create a tide of history for a global paradigm shift in politics.

Japan is determined to lead the global trend with this “new form of capitalism” and will provide concrete examples of how capitalism can evolve as Japan assumes the G7 presidency next year.

The central policy in this effort is to create a virtuous cycle of growth and distribution. That is, we emphasize a distribution strategy that ensures that the fruits of growth serve as a catalyst for investment in our human resources and for wage and income increases.

At the last year’s summit, Prime Minister Kishida paid tribute to an announcement made by Vietnam at COP26 that it would become carbon neutral by 2050 and pledged Japan’s full support for Vietnam’s energy transition initiative. What role does Japan want to play in achieving carbon neutrality in Asia?

The issue of climate change highlights the negative aspects of capitalism: market failures due to placing excessive importance on efficiency, lack of sustainability, and environmental inequalities between rich and poor countries, to name a few. This “priority problem” can be overcome by realizing a “new form of capitalism.”

At the same time, it is also an opportunity for a new field of growth that is attracting global attention. In Japan, the public and private sectors will at least double their investments in this area to achieve the goal of reducing greenhouse gas emissions by 46 percent by 2030 and achieving carbon neutrality by 2050. We see this sector as the engine that will both realize decarbonization and generate growth for a new era.

Another important point is that Japan will use its technologies, systems, and expertise in hydrogen and ammonia, as well as in other areas, to contribute to the decarbonization of the world, especially Asia, and to take the lead in technical standards and international infrastructure development together with other Asian countries. Our goal is to work with like-minded countries in Asia to create a community that can be called the “Asia Zero Emissions Community.”

Just as the European Union began as the European Coal and Steel Community during the Cold War, Japan envisions an “Asia Zero Emissions Community” in Asia where both geopolitical and geo-economic challenges are increasing. This community would become a platform to advance related efforts, such as international joint investment in the development of zero-emission technologies and hydrogen infrastructure, joint financing, the standardization of related technologies, and the establishment of an Asian emissions trading market.

When Prime Minister Chinh visited Japan in November 2021, I responded in a question in your newspaper that “Japan-Vietnam relations are at their best today” and that “we are aware of Vietnam’s enormous potential for future growth.”

This year, Japan and Vietnam will continue to work together to overcome the COVID-19 pandemic and revive our economies. Looking ahead to next year, which will be a milestone for our two countries given that it will be the 50th anniversary of the establishment of diplomatic relations, we hope that 2022 will be a year of great development in our bilateral relations.

Finally, this year’s zodiac sign of the tiger includes the meaning “new trends emerge and will bring great growth.” In 2022, we hope that the COVID -19 pandemic will subside significantly and Japan-Vietnam relations will continue to make great progress.

We wish you all a very happy new year.

It is said that Mr. Kishida has about 30 notebooks containing comments and appeals from the Japanese people. Can you tell me more about this?

Prime Minister Kishida makes a point of listening to the voices of the public. Since becoming prime minister, he has organized small group talks and visited medical facilities, Japanese pubs, and places affected by the Great East Japan Earthquake to hear the voices of the people.

Regarding the “Kishida notebooks,” the prime minister commented as follows in last November’s issue of Bungei Shunju magazine that “I have been keeping these notebooks since the Liberal Democratic Party lost power in 2009, more than ten years ago. I have about 30 notebooks now. People often ask me to take notes on the spot, but it’s difficult to talk to people while I am taking notes. I just listen on the spot and then write down what impressed me after I talk or before I go to bed. Sometimes, I take quick notes after the person leaves, too.”