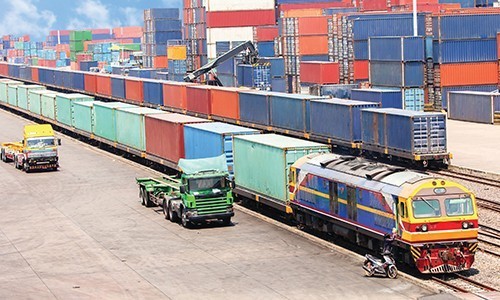 The figure was 635,000 tons for imported cargo transport to Vietnam, up by 38 percent.

VNR also focuses on carrying goods with liners, increasing the proportion of cargo container transportation and accelerating the international multimodal transport through carriage between Vietnam and China, and from Vietnam to Europe, Russia and Mongolia with transshipment in China.

In 2021, the corporation put into operation a new service – international container transport through carriage to Europe.

Ratraco, specializing in carrying cargo to Europe by railway, said the company has cooperated with large major shipping lines to import and export goods for Vietnamese enterprises.

The company reported an increase in international transportation through rail carriage with the total output of 946,000 tons, an increase of 300 percent over the same period last year.

This included 11,247 containers transported in the first 11 months of the year, up by 137 percent. The major imports and exports are consumer goods, ore, electronics and industrial woodwork.

According to Hanoi Railway Transport JSC, with solutions to promote cargo transport through train carriage, the international transport output of the company in 2021 increased sharply compared with last year, estimated at 858,000 tons, which meant a 9 percent growth rate. Of this, imports were estimated at 495,000 tons.

Vu Anh Minh, Chair of VNR, said focusing on transporting cargo, liner goods and container goods across the border is the policy the corporation has been pursuing since 2019.

However, he said though railway transportation output across border gates has been growing rapidly, it is not high compared with the going-through demand.

The problem, according to Minh, lies in the poor railway infrastructure, which is not commensurate with infrastructure in other countries. While Vietnam’s railway gauge is 1,000mm, China’s is 1,435mm.

Also, Vietnam’s railway is single track, while the going-through capacity of double-track railway is 20-30 times higher.

The railway development plan approved by the PM says that the railways need to be upgraded, and the Hai Phong -Hanoi – Lao Cai/Lang Son will be upgraded to have 1,435mm gauge.

The Cat Linh – Ha Dong elevated railway project provides a lesson on public asset valuation. Selling and buying back infrastructure projects at their real value will allow the effective usage of resources.

Vietnam wants to raise up to US$10.5 billion for national railway development in the next 10 years.