Nguyen Ngoc Manh, a truck driver, became known throughout the country after he saved a little girl who fell from a Hanoi apartment complex in February. 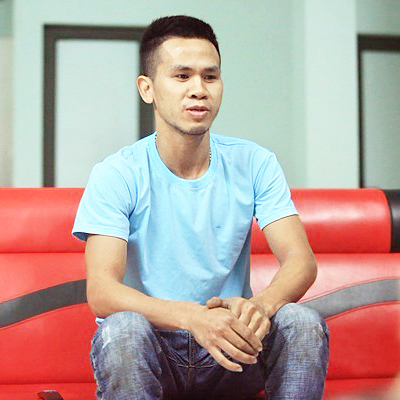 He is one of the 14 Inspiring Characters 2021 nominated by VietNamNet.

Manh’s wife, Phung Thi Thuy, did not even know what her husband had done until journalists arrived at their home.

His mother, Nguyen Thi Nhan, said it was heart-wrenching watching the clip showing the moment her son flung himself out to catch the girl who was in free fall.

She said that most people would have reacted similarly – reaching out to catch the girl falling off a balcony on the 12th floor of the 60B Building on Nguyen Huy Tuong Street in Thanh Xuan District in Hanoi.

“Any father would have done this in such a situation. Animals also protect their children, let alone a married man, who understands what fatherhood is like,” she said.

Manh said he doesn’t see himself as a hero. He just wants to “do good” and refuses money from the public.

The story of Nguyen Ngoc Manh not only stirred the community of netizens but also the entire commune in the suburban district of Dong Anh in Hanoi where he, his wife and two children live.

His action has awakened compassion that had long been forgotten in the busy life of modern society.

Manh’s act did not surprise his relatives because since the day he was born, he has always been a warm-hearted and kind person.

The young wife told the press that her husband was shivering after getting home.

“He could not think about anything at the moment when he saw the girl falling down. Only when he was able to hold the baby in his arms did he realize he was shaking,” Thuy told reporters, adding that everything occurred in two minutes.

“What if the child was our daughter? That is what he thought at that moment,” she said.

Nhan said her son is a kind-hearted person. When he returns home from work and sees old people selling vegetables on the street late at night, he often buys all the vegetables so the sellers can return home.

Thuy said she loves her husband because of his kindness and love for people. However, his good nature can sometimes be exploited by people. But Manh says that when he offers other people a “gift”, he also receives a gift and joy from God.

As someone who often takes part in many charitable activities, Nguyen Dinh Ba, chairman of the Vietnam Red Cross Society chapter at Quang Trung College in HCM City, wanted to do something to help others during the fourth COVID-19 wave this summer.

Over the past two months, Thong has taken hundreds of patients in his ambulance to medical facilities in HCM City and Quang Binh Province.