In Vietnam, elderly woman donates own skin to save son’s life 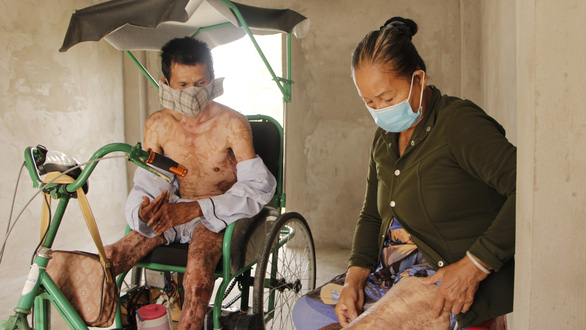 62-year-old Vo Thi Thu Ha (right), from southern Kien Giang Province, is still in pain after donating her thigh skin to her son, Thai Minh Phuong, but she is thankful that her sacrifice saved his life. Photo: Chi Cong / Tuoi Tre

An elderly woman from Kien Giang Province in Vietnam’s Mekong Delta is healing from a painful, lifesaving medical procedure she went through to help save her son from the life-threatening burns that once covered his body.

Vo Thi Thu Ha from Ta Loc Village, Son Kien Commune in Hon Dat District did not think twice before donating a massive amount of skin from her thigh to her son’s skin graft surgery.

Though her leg is riddled with scars, the pain from having her skin removed is nothing compared to the agony of seeing her son in soreness from the burns on the entirety of his body.

‘I just need him alive!’

Ha, 62, has never had an easy life. As a child, her family had very little and poverty seemed to follow her into her adult years.

After marrying her husband, Le Van Duong, the couple moved into their house in Ta Loc Village and began working as hawkers.

Though their life together was difficult, they had no qualms about bringing two children into the world.

As an adult, Thai Minh Phuong, Ha’s son, spent his days maneuvering a sampan throughout the Mekong Delta’s winding waterways to scavenge for coconuts.

Selling the coconuts earned him about VND100,000 (US$4.4) per day, which he put toward supporting his aging parents.

Things became more difficult for the small family in 2011 when Duong was caught in a motorbike accident on his way to work. Though he survived, he now suffers from a chronic brain injury.

In November 2020, the family’s fate once again took a turn for the worse when a petrol leak on Phuong’s sampan caught fire and the boat went up in flames, engulfing him and leaving critical burns all over his body.

As he writhed in pain at Kien Giang General Hospital, Ha could do nothing but look on a worry about the fate of her son.

Doctors decided their best option to save Phuong’s life was to transfer him to Cho Ray Hospital in Ho Chi Minh City for intensive treatment.

Though Ha only had VND500,000 ($22) to her name, she insisted that doctors carry out the transfer and do everything they could to save her son. She would worry about finances later.

Ha expected to give up everything she had to pay for her son’s surgery, but she never thought of what would come next: donating her own skin.

After the transfer to Cho Ray, doctors told Ha her son needed donated skin for a skin graft surgery. Ha did not hesitate to volunteer.

Even after doctors explained that Phuong only had a limited chance of survival, the mother remained steadfast in doing everything she could to give her son a lifeline.

Soon after the medical operation, doctors announced that everything had gone smoothly and Phuong would recover.

Ha herself was still in pain from having the skin removed from her leg, but it was a small price to pay to keep her son alive.

A path to healing

After undergoing several surgeries during his four months at Cho Ray Hospital, Phuong is currently on the mend.

But while his life has been saved, it will definitely never be the same. Doctors believe he will never walk again and he is currently confined to a wheelchair gifted by local philanthropists.

The transition from being healthy and independent to completely dependent on his mother has led Phuong to contemplate suicide more than once.

“I just wanted to die then. It was so bad that I even had bones protruding from my legs,” Phuong recalled.

Fortunately for Phuong, the love and support from friends and his family was enough to keep him going.

“My mom gave birth to me the second time. If I died, she would never get over the grief,” he said.

Now, though his life is completely changed, Phuong is determined to start afresh, heal, support his own child, and provide for his parents the same way they have always done for him.

To earn money, he sells lottery tickets though lockdowns and social distancing restrictions induced by COVID-19 made life difficult for a while. Still, Phuong is trying to look on the bright side.

Ha is equally excited for what life has in store for her.

Her daily routines include getting up in the small hours to cook for her family, tend to her son’s wounds, and cycle a small food stall where she sells banh chuoi chien (fried banana pastry).

Meanwhile, her husband Duong cycles more than 10 kilometers each day to sell lottery tickets, though there are days when the brain injury from his road accident affects his business and he loses money.

Yet Ha remains optimistic about her family’s future.

“My husband and I can make more than VND100,000 each day. I use that money to buy food and medication for my son,” Ha explained.

According to Pham Van Linh, chief of Ta Loc Village, Ha and her husband receive a monthly government grant of nearly VND300,000 ($13) to support their needs.

“We really sympathize with Ha’s situation and provide rice and essentials to help her family get by,” Linh said.

Le Hoang Ba, a local religious leader, said he and other members of the local community raised money from philanthropists from across Vietnam to cover Phuong’s medical bills.

Ba added he is full of admiration for Ha’s sacrifice and love for her son.

He could not believe that she was back on her feet just one week after undergoing a surgery herself to save her son’s life to tend to his needs.