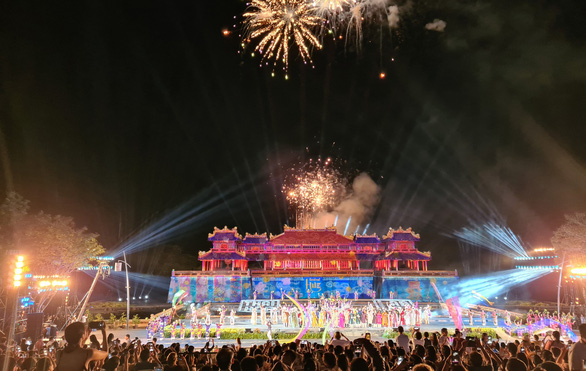 Hue Festival 2022 kicked off on Saturday evening in the eponymous city in central Vietnam, after a two-year halt due to COVID-19, centered around the ‘Cultural Heritage with Integration and Development’ theme.

The opening ceremony at Ngo Mon Square, which attracted thousands of visitors, began with a unique art program along with an ao dai (Vietnam’s traditional gown) show, depicting cultural values and identities of Hue City, an ancient capital, as well as Thua Thien-Hue Province in general.

After over 20 years of organization, Festival Hue has become a national cultural and artistic event to promote Vietnam’s cultural quintessence and the ancient royal city of Hue as a safe, friendly, and beautiful destination, said deputy chairman of the provincial administration Nguyen Thanh Binh, who is also head of the festival organizing committee.

This year’s festival, scheduled to last from June 25 to 30, includes eight main festive programs, along with 29 accompanying exhibitions and other activities, said Huynh Tien Dat, director of the Hue Festival Center.

Among its diverse activities will be a beer festival, a street carnival, and a music program featuring famous songs by late composer Trinh Cong Son.

A hot-air balloon festival and a display of 20 paintings of ‘Truyen Kieu’ (The Tale of Kieu) and traditional costumes of ASEAN countries are also included in the event’s plan.

The Vietnam Summer Fair 2022 and a SUP (Standup Paddle Board) competition along the Huong (Perfume) River will also take place in the festive period.

Those loving the excitement of modern music genres will not want to miss electronic dance music and rock fests as part of Hue Festival 2022, which gathers nearly 400 performers of 15 domestic troupes, along with many international art groups from seven countries.

This year’s festival will see performances by domestic and foreign art troupes on stages set up along the banks of the Perfume River, not just confined to the area of Hue Citadel like in previous editions, the organizing board said.

The festival is also a chance to introduce to international visitors UNESCO-recognized cultural heritage sites in Hue, including the Complex of Hue Monuments, Hue Royal Court Music, Woodblocks of the Nguyen Dynasty, the Nguyen Dynasty’s royal documents, and the Royal Literature on Hue Royal Architecture, according to the organizers.

About 200,000 visitors are expected to join the festive activities, the provincial Department of Tourism said.