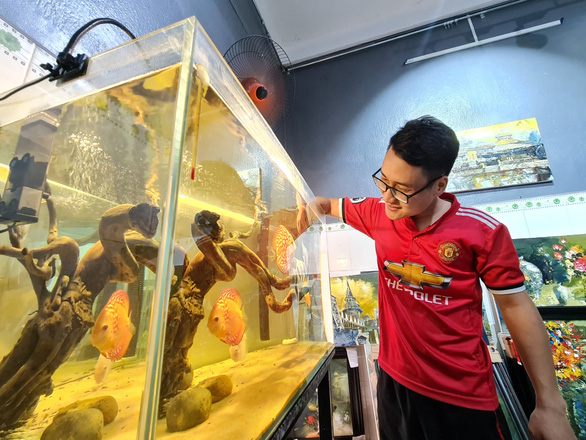 Pet care service has been popular in Vietnam for years, and now it has extended to cater for fish lovers, especially those living in Ho Chi Minh City.

On their long business trips or holidays, these owners can now rest assured that their beloved fish will be in good hands.

Obviously, travelers do not have the luxury of taking their fish along. Sending the fish to a specialized ‘hotel’ is ideal for those who have to be away for a long time.

According to Duc Phuc, a fish store owner in Ho Chi Minh City, some fish species are challenging to handle.

“They demand constant water filtering while their diet consists of beef, cow’s heart, fresh shrimp or other seafood. No kidding!

“The cost of the fish care service is only as much as the money spent on their food and water tank maintenance.”

Caring for the dear fish

Fish care is relatively novel in the field of pet fish selling and buying in Vietnam.

To certain fish farm owners, offering a guesthouse for their customers’ dearest friends is one way to keep healthy business relations.

Dumping in a mixture of cow’s heart and minced fish foods and vegetables, the man watched closely.

“It’s harder than taking care of children. You have to pay attention to the water currents, the temperature, and the pH level of the water,” Thung said.

The pH is a measure of how acidic or basic water is.

At the end of the previous lunar year, Thung had his plates full, but he was highly concerned now that his fish had nowhere to stay.

He spent all of his spare moments looking for a suitable fish care service on the Internet.

Only when he located a good inn did he feel ready to book an airplane ticket back to his hometown in Ha Tinh Province to be with his family.

“I was moved to tears when I finally found a place for them. Taking care of the fish for only a few days is enough for a strong bond with them,” he said.

“I can’t just leave them here [in Ho Chi Minh City] like that.”

A keeper of discus for over a decade, Vu Thi Hien – owner of a fish farm in Ho Chi Minh City – said that the demand for fish care has merely grown in the last few years.

“The discus are tough guys. They’re very hard to look after, so very few people take them,” she said.

“It’s really complicated. To keep the discus, you’ll need the right size for the fish tank, and you have to be experienced. You’ll make a signed contract and be totally dedicated.”

“For the Tet [Vietnam’s Lunar New Year] holiday, I don’t even dare to travel anywhere far away for too long because nobody will take care of these fish.”

Once an electrician and owner of an English teaching school, Hien and her husband have been involved in the raising and selling of discus for the last 10 years.

Her two rented premises are located on Tran Thai Tong Street in Tan Binh District, each nearly 100 square meters in size with over 100 tanks in total.

“One of the premises is a showroom, and the other is the hotel for discus owners,” Hien said.

“My husband takes care of these fish here, but his younger sister in Cu Chi District [in the suburbs of Ho Chi Minh City] has over 1,000 tanks for wholesale businesses, small quantity sales for home use, and export to other countries.”

Discus live in groups. Their owners often keep a school of nine to 10 members all of the same color based on their Feng Shui beliefs.

When customers move their fish from their home to the hotel, Hien first places an air bubbler in their bag.

An hour after that, water is added slowly to the tank for ease of adaptation, followed by the addition of an antibacterial solution.

It is best to renew the tank water two times every day.

Once the fish have come to terms with their new environment, they will stay in a quiet setting with no decorations.

The carers now watch the pH and temperature closely, provide adequate food intake, and renew water every day so that the discus can be healthy, shiny and will not grow black scales.

They will also apply other measures to increase the immunity of the fish and watch out for their signs of sickness.

A wide price range for the fish hotels

For any fish hotel, these pets always have their own private rooms. Each type is only used to a setting with varying vibrance of water.

There is also the chance of transmitting diseases.

To certain fish farm owners, this hotel service is not a business, because they only provide the service to their patrons.

Duc Phuc, a farm owner on Truong Chinh Street, Tan Binh District, Ho Chi Minh City, said that he would not agree to take in fish from strangers.

“I do not run a fish care business. I only keep them for those [customers] that I know. I am dead busy, but I want to help them feel assured when they have to be away from the city for longer,” he said.

Before the recent Lunar New Year holiday, Phuc took in around 200 tanks of guest fish, a considerable increase compared to the whole year.

Phuc does not limit the length of their stay. Fish can stay in his place for weeks to a year.

“Customers who come to me have confidence in my quality. Sometimes, I have to take pictures or videotape them to show the owners,” he said.

“They miss their fish and care for them a lot.”

This wild difference is due to the rarity, the difficulty and the value of the fish as well as the contract with the customers, according to Phuc.

Compared with other pets, fish are very tough animals to care for.

With over 30 years in the business of pet fish, Tran Trong Khang, owner of a fish store on Ly Chinh Thang Street in Ho Chi Minh City’s District 3, cautions the complicated risks one might run into if they decide to offer a pet care service.

“It was a regular customer and he was nagging a lot, so I finally decided to take the fish in.

“It was okay at first and the fish was doing well and enjoying its food, then suddenly it jumped out of the tank and was lying flat on the floor.”