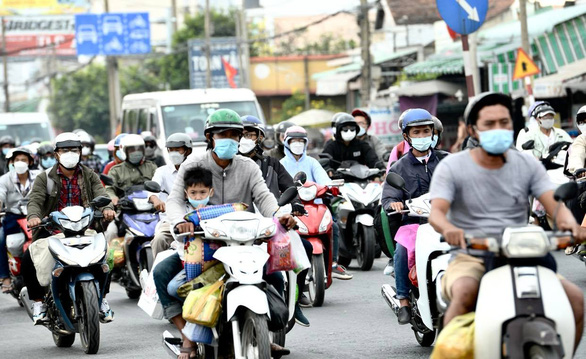 Most ways leading to Ho Chi Minh City, including the Cat Lai Ferry, were crammed with people and vehicles returning to the city on Sunday after the Lunar New Year, or Tet, holiday.

Vehicles began to fill all the entrances to the southern city from late Sunday afternoon, while cars lined up on a one-kilometer road section near the terminal of Cat Lai Ferry in Dong Nai Province’s Nhon Trach District, as noticed by Tuoi Tre (Youth) newspaper reporters.

The enterprise managing the ferry said it had expected to receive 70,000 passengers at the terminal, which connects Dong Nai with Thu Duc City under Ho Chi Minh City, on Sunday.

It therefore had to operate seven ferries continuously to transport people to Ho Chi Minh City from Dong Nai and other eastern localities.

Traffic police officers in Dong Nai were deployed to the ferry area to regulate the traffic and ease the congestion.

The same situation developed at the Long Phuoc toll station area on the Ho Chi Minh City – Long Thanh – Dau Giay Expressway, where long lines of cars were inching to get through the toll booth, located in Thu Duc City.

On a section of National Highway 1A in Binh Chanh District, numerous motorbikes carrying people from the Mekong Delta region back to Ho Chi Minh City and other eastern provinces for work resumption.

Phan Thanh, a woman back from Ca Mau, said the traffic on the highway was heavy but there was no severve congestion.

The Tet break lasted nine days from January 29 until February 6.