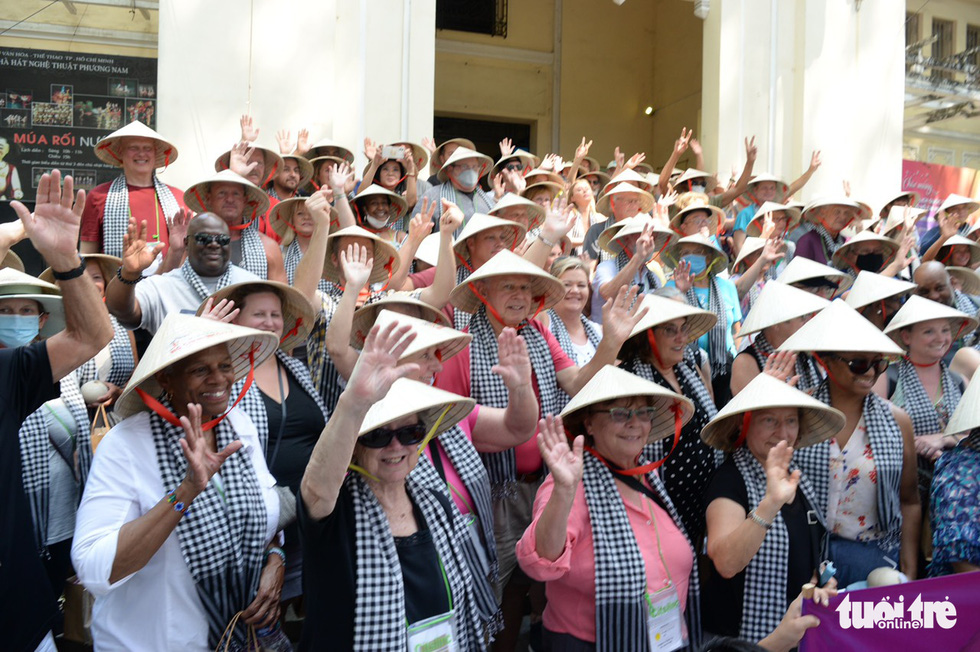 These travelers, who are on their 10-day trip throughout Vietnam, were given a warm reception by local authorities at the Vietnam National Museum of History in District 1 on Friday morning.

Leaders of the Ho Chi Minh City administration and the director of the municipal Department of Tourism personally welcomed the travelers and gave them gifts of palm-leaf conical hats and checkered scarves.

Their tour was organized by U.S.-based Citslinc International Inc. in conjunction with Asia Charm Tours, a Vietnamese travel firm.

As scheduled, the visitors, most of them coming to Vietnam for the first time, will stay at Muong Thanh Hotel in Phu Nhuan District, enjoy food at the Rex Hotel restaurants in District 1, and take a cruise on the Indochina Queen on the Saigon River, Sai Gon Giai Phong (Liberated Saigon) newspaper reported.

After the reception ceremony, the group was divided into two sub-groups, one visiting the Cu Chi Tunnels in the namesake district and Ben Thanh Market in District 1 and the other going southward to explore the Mekong Delta region.

The group has been slated to join activities in the framework of the 8th Ao Dai (Vietnam’s tradition dress) Festival in the city.

A representative of Citslinc International Inc. said the group had already chosen the southern metropolis as their longest stay in Vietnam to experience many destinations and enjoy delectable cuisine and quality services.

This tourist grouping came as the Vietnamese government has resumed regular international commercial flights since February 15 and fully reopened tourism to foreign travelers since March 15, after around two years of closure due to COVID-19 impacts.

Speaking at the ceremony, deputy chairman of the municipal People’s Committee Duong Anh Duc thanked the traveler group for including Ho Chi Minh City in their list of destinations in Vietnam.

The official also hailed the municipal Department of Tourism for preparing the city’s plan on tourism resumption.

With its potential and advantage, as well as visitors’ support, the city’s tourism sector will soon recover and affirm the position of the southern hub as one of the leading tourist destinations in Vietnam.

After two years of interruption due to COVID-19, Citslinc International, Inc. decided to bring American tourists to Vietnam as it has received substantial assistance from Vietnamese authorities, said Leo Liu, president of the travel firm.

Liu strongly believed in Vietnam’s tourism reopening process, adding that the American tourists have felt satisfied over the past days of their visit, which proves the tourism reopening is appropriate and effective.

Stephanie, from Utah, said that the 10-day tour in Vietnam will continue taking her to attractive destinations and offer her delicious food, but above all, she is most impressed by the hospitality of the local people in places she has gone through.

The enthusiastic reception by local authorities on Friday morning is certainly among the highlights of the journey, she added.

Another tourist, Terry Keyes, said he would come back to Vietnam to keep discovering beautiful landscapes as well as delicious foods.