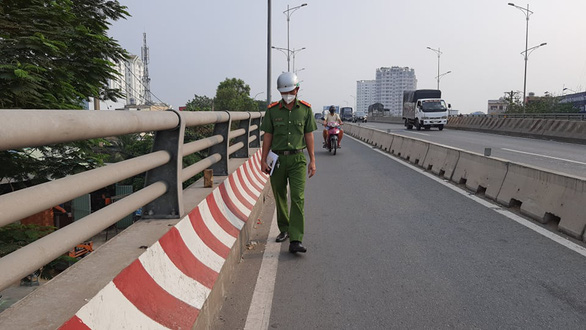 A police officer is shown carrying out a routine patrol on a section of the Provincial Road 10 Overpass in Binh Tan District, Ho Chi Minh City.

Ho Chi Minh City authorities have made a move to prevent sharp nails from being scatteredalong major roads after a large number of such metal objects had been collected recently from different roadways.

Functional units have been mobilized to carry out routine patrols and warn vehicle repair shop owners on the big roads where motorcyclists often fall victim to tire-puncturing nails.

Banners stating that deliberate nail scattering is a punishable offense, with a hotline number for reporting offenders, have also been hung up along National Highway No. 1 in Ho Chi Minh City.

“I have always strictly complied with the law and never had the intention to spread nails,” claimed a car repair shop owner in response to the authorities’ reminder.

Nearly a kilogram of sharp metal objects and brake wires cut into small pieces was found on separate sections of major roads in the city last week, raising the alarm among motorcyclists and local authorities.

Workers from IDICO Infrastructure Development Investment JSC also collected almost a kilogram of metal objects from a 50m-long section of the Provincial Road 10 Overpass in Binh Tan District within just 15 minutes on Sunday.

The rhombus-shaped metal objects were believed to be purposely scattered by repair shop owners along the roads to puncture tires and thus force drivers to use their service, normally at exorbitant prices.

The repair shop owners in question are required to make a serious commitment to stop scattering nails, according to police officers.