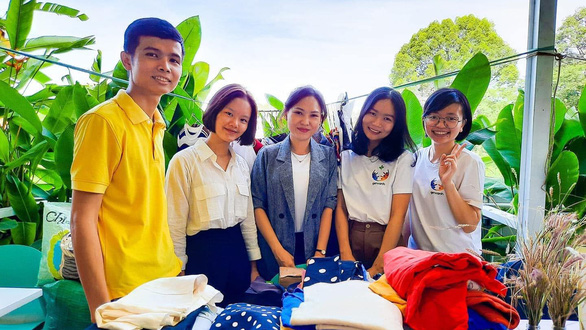 Dang Thi Thom, currently a first-year student at the Ho Chi Minh City University of Economics and Finance (UEF), founded Gen Xanh Club when she was in high school, in the hope of working with other young environmentalists to launch a meaningful environmental campaign.

The group has stood behind practical activities, including green markets where participants come to exchange trash for gifts.

The markets have collected ten tons of second-hand clothes, several tons of batteries, electronic waste, and many milk cartons and glass bottles.

The green markets take place monthly in Cu Chi, an outlying district of the city, and always receive positive responses from participants.

“The collected products are sorted and reused, or taken to scrap dealers,” Thom shared.

“Things we do for the environment today will, sooner or later, impact our own health and even our children in the future,” said Ngoc Tanh from Cu Chi, an event-goer.

In hopes of raising the public awareness of disposing of trash in the right place as well as sorting and recycling waste, Thom has stepped up her goals when giving presentations to students and parents at sharing sessions held in local schools.

“Lifestyle education must be taught from a young age,” she said.

“We teach children how to protect the environment with small acts such as reusing things, saving electricity and water, and planting trees, which can help them pick up green habits at an earlier time.”

The medals awarded to race winners were hand-made from recycled materials by the Gen Xanh Club members.

The club is currently scaling up their locations in Ho Chi Minh City and Da Lat City under Lam Dong Province, focusing on collecting broken yet usable glass waste to donate to businesses in need and transport to glass recycling plants.

“Reusing glass will not only reduce the heat released in the glass-making process but also save the raw materials,” Thom emphasized.

Old clothes will be classified into different categories of which parts are sold at the club’s event booth to raise funds for the Gen Xanh, or handed over to charity organizations or reused as nests for animals in rescue stations.

Regarding electronic waste such as batteries, phones or electronic devices, some are donated to needy people while the rest are to be brought to recycling plants.

“We do the same to clean milk cartons,” Thom added.

She said that her team wants to build as many garbage-for-gifts points as possible during the whole campaign, to initially change the people’s waste habits in a convenient and time-saving manner.

The group has won the hearts and minds of the community by confidently representing a positive image of the young generation, a green one with their much-needed message to both nature and society.