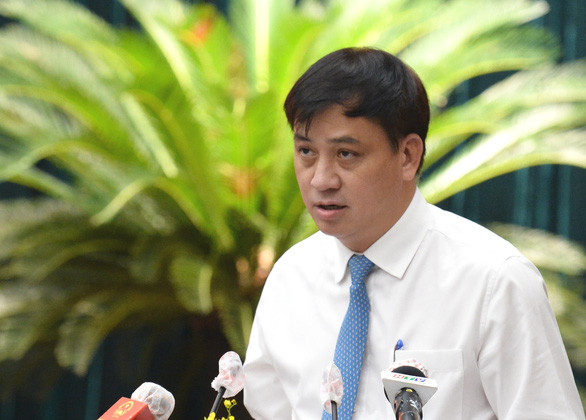 Le Hoa Binh, standing deputy chairman of the Ho Chi Minh City People’s Committee, passed away in a traffic accident on an expressway on Tuesday morning.

The official was taken to the hospital in critical conditions after the accident occurring at 7:45 am on the Ho Chi Minh City – Trung Luong Expressway, when he was on a business trip to the Mekong Delta province of Tien Giang.

The tire of the seven-seater car, driven by 33-year-old Nguyen Quang Vinh, suddenly blew out, causing the vehicle to flip over in Ben Luc District, Long An.

It was carrying Binh and another man, Duong Tan Truoc, 41, at that time.

The crash caused heavy injuries to all three people who were hospitalized for emergency care.

Binh had cardiac and respiratory arrests when hospitalized and he succumbed to his severe conditions despite doctors’ great efforts.

At 11:30 am on Tuesday, chairman of the Ho Chi Minh City People’s Committee Phan Van Mai and other municipal officials arrived at the hospital to take Binh’s body back to the city for a funeral.

The city government has directed relevant agencies to coordinate with Long An authorities to investigate the cause of the road crash.

Details of Binh’s funeral will be informed by the Office of the municipal People’s Committee later.

A native of central Quang Ngai Province, Binh had a master’s degree in civil and industrial construction and a bachelor of economics, along with a certificate of advanced political theory.

He became the director of the local construction department in April 2019.

In March 2016, Binh was chairman of the People’s Committee of the city’s District 7.