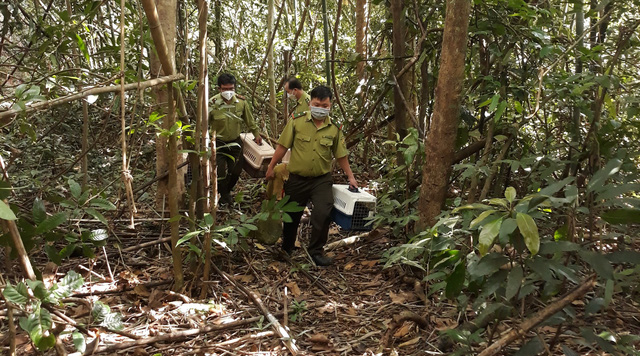 This supplied photo shows rangers bringing endangered wild animals in cages to release them into nature in southern Vietnam.

Six primates, which had been caught in a residential area in Ho Chi Minh City, and more than 200 other endangered wild animals have been returned to the wild, the municipal forest protection department said on Monday.

The six monkeys were among a group of primates that had paid unwelcome visits to a residential area in the city’s District 12 in January 2021 before being transferred to the Cu Chi Wildlife Rescue Station in the namesake district for treatment and care.

It is said that their parents had escaped the cage of a local man about ten years ago to dense trees near a local canal.

All of those 210 wild animals, which are classified as endangered and rare, had been voluntarily handed over by organizations and individuals to the wildlife station.