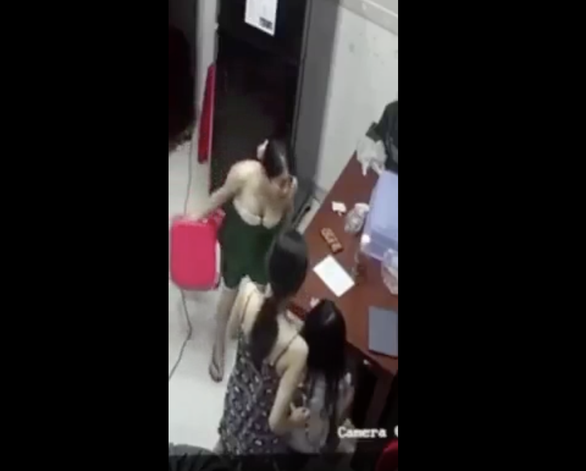 A video still shows V.L.H.T. hitting her 12-year-old daughter with a plastic chair.

Ho Chi Minh City’s authorities said on Thursday morning that they were investigating an article and a video published online which purportedly show a mom hitting her biological daughter with a plastic chair.

The article, titled “12-year-old girl is abused by own mother for four years, prompting her aunts to call out for help,” was published earlier this week.

Upon being notified of the case, the People’s Committee of Phu Nhuan District in Ho Chi Minh City asked local police to investigate the incident.

According to police, the girl was identified as V.T.K., a 12-year-old who lives with her mother, V.L.H.T., 31, and aunts in the district.

A health check carried out at Phu Nhuan District Hospital showed that K. was suffering from slight pain on the left side of her brain, left wrist, and left hand.

She also had swelling on her left temporal lobe, as well as scratches on her skin and fingers. She is currently in stable condition.

While speaking with local police, K.’s aunts denied the abuse had been going on for several years.

The article which published the original story claimed that the abuse had been going on for four years and that K. had once told her mom to “beat me to death.”

“T. sometimes scolds or punishes her daughter when she is mischievous or makes mistakes,” an aunt said.

Following an extensive investigation into the incident, police determined that it was a misunderstanding.

T. admitted that she sometimes gets angry and yells at her daughter, particularly during times of financial and personal struggles.

District authorities have requested that K. be temporarily isolated from T. and that an aunt is assigned to protect the child.

Police are also continuing to collect testimonies and evidence in order to clarify the case and handle the situation in accordance with the law.

K.’s parents were never married and K.’s dad left her family when she was just baby.

She grew up living with her grandma as T. worked abroad in Singapore for eight years, said local police.

K. moved in with T. when she returned to Vietnam.