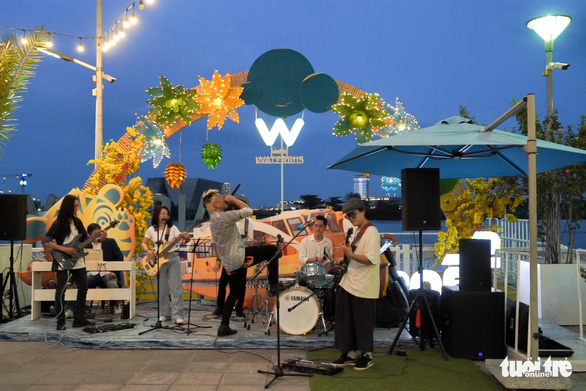 UNLOCK, a rock band landing in the top 16 of the Rock Viet TV show, had a wonderful moment performing at the street music show ‘Co Hen Voi Sai Gon’ (A Date with Saigon) on March 5, 2022. Photo: Huu Hanh / Tuoi Tre

The show is a non-profit street art and music project, which takes place every Saturday, from 5:30 pm to 7:00 pm.

Following its successful debut, the music space came back on Saturday night with awesome gigs that drew attention from large crowds of both music buffs and tourists.

The show lasted for an hour, during which audiences were submerged in the wonderful music from UNLOCK, a rock band landing in the top 16 of the Rock Viet TV show, SAIGON WAVE, a group of musicians, singer Tyna Nguyet Thu, and the child singer Bella Vu.

“We were over the moon since we stood close to the audience, felt the same atmosphere, and interacted with them in a spontaneous and natural manner,” said MOJO, an UNLOCK member. “We ‘set the stage on fire’ with our nine consecutive songs.”

“I am so happy to be into music with young people in the midst of an open space, which is located just right in the center of dynamic Ho Chi Minh City,” said Nguyen Tan Loc from the Ho Chi Minh City Conservatory of Music.

“Other lectures and I are so ready to feature in some performances which somehow encourage our students to be more confident in their own musical capability,” Loc added.

“I really enjoy the outdoor music performance as people can easily connect with each other,” Nguyen Anh Phuong, a music fan, commented on her discovery of this new street music space.

“Watching sunset on the Saigon River covered in boisterous sound from the ships docking nearby and the beautiful melodies from those street musicians is a unique experience for me,” remarked a music buff attending the show.