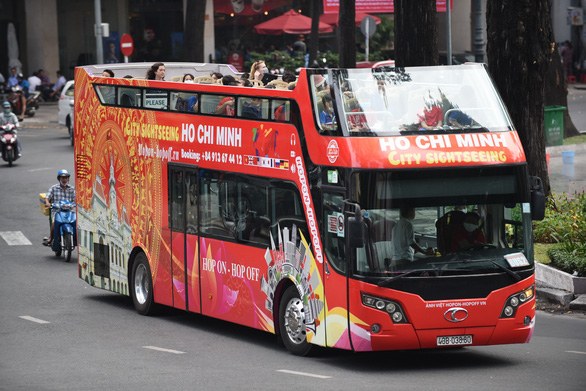 Editor’s note:The story is written by Lynda Cade, in response to the ‘Ho Chi Minh City Goes Global’ contest, an open forum for readers to contribute their ideas and solutions to raise the position of Saigon – Ho Chi Minh City in the international arena.

The contest is co-organized by Tuoi Tre (Youth) newspaper and the Ho Chi Minh City Department of External Relations to prepare for the celebration of Vietnam’s National Day on September 2.

First, let me start by saying that I’ve been fortunate enough to call Ho Chi Minh City home for some time now, and I’m still struck by the vibrancy of life in the city. It’s an intoxicating place that never fails to surprise me.

I’m always in awe of around 5:00 pm, just before the sun sets and traffic picks up, as I witness the already bustling streets begin to hum with even more activity. The golden yellow hue of the sky seems to amplify the honking of motorbike horns as they whizz by, all somehow connected to the flow of each other.

This somewhat insignificant moment captures what I believe to be just one tiny fragment of the city’s soul. A unique piece of Ho Chi Minh City that’s effervescent even as the cityscape builds up around us.

So, it’s a pity that, when I talked to friends back home in London, they had some surprisingly outdated preconceptions of Ho Chi Minh City. I heard the surprise in their voices when I talked about some of the restaurants I visited, for instance. For them, Vietnam is a country fresh from war, and it’s far from being developed.

Wars, unfortunately, are a part of Vietnam’s history, but the country and city have so much more to offer. However, what’s clear is that a considerable part of the story isn’t making it to the other side of the globe.

To answer the question, ‘How to raise Ho Chi Minh City’s global status and put itself alongside the world’s leading metropolises?’, we need to understand the message being received by foreigners, look to global trends, and find a means to communicate the soulful story of the city.

Let’s take a step back for a moment and put ourselves in the shoes of a distant traveler looking for their next adventure.

People rarely travel without doing some research first. When I plan city breaks, I usually look to a city’s website for area guides, find out where to eat and what events are on.

When it comes to Ho Chi Minh City, there are a few independent guides online. Some do a better job than others, but for the next potential city explorer, it’s a task to sift through the information. Most offer the same options again and again — Cu Chi, War Museum, Cathedral — and they aren’t regularly updated.

Ho Chi Minh City is constantly evolving, you only need to walk down a street you haven’t visited in a while, and there’s a new coffee shop or bar. Or, in some cases, entire apartment blocks pop up out of nowhere.

As a tourist, I want easy access to reliable, up-to-date information about museums, galleries, and the best restaurants in town. Just look at other city websites for inspiration — London, Melbourne, Helsinki — all are great examples of how to showcase a city from afar.

The travel website run by the Vietnam National Administration of Tourism, which I’m told had a makeover recently, looks fantastic. It paints a stunning picture of Vietnam as a whole. It’s fresh, modern, and exciting. Just looking at it makes me want to hop on the train and travel up the coastline. In fact, I might.

However, in contrast, the Visit HCMC website, I’m sorry to say, is lacking. Is it an accurate representation of Ho Chi Minh City? I don’t believe so. In agreeance with Ton Nu Thi Ninh’s article, maybe a cohesive re-branding of the city is neeeded.

Check any of the websites I’ve mentioned and you’ll see a trend emerging: sustainability. It is a not-so-glamorous word and one that’s often overused. But let’s face it, a city without a ‘sustainable’ plan for responsible growth is going to fall short eventually.

People are already turning their noses up at overhyped tourist attractions and are instead looking for more authentic holidays. In some cases, they are traveling with purpose and leaving a positive impact on the destinations they visit. They want to mingle with locals and experience cities as though they were habitants. In other words, they want to decrease their footprints and maximize their experiences.

Look to Helsinki’s Feel Good and Fair Play hotels as an example. For years, Helsinki’s accommodation providers have already paid attention to environmental aspects, such as energy and water consumption, and reducing food waste in their restaurants. At the same time, social responsibility and fair employment have become increasingly important. They focus on all aspects of sustainable operations.

Assuming tourism in Vietnam returns to ‘normal’ and considering that it plays such a vital role in Vietnam’s economy (12 percent of the country’s GDP pre-COVID), it seems only sensible that investment is put into sustainable and responsible development.

Just make fair pay, health care, training, progression, responsibility, and recognition a priority for every individual contributing to the industry. Too often, the jobs are menial and for low-skilled workers.

How about introducing a citywide certification that sets guidelines for hotels, tour companies and travel agents, and lets tourists book with confidence?

Small improvements like water refills and making the removal of single-use anything in hotels compulsory aren’t expensive to introduce but will make a big difference and encourage behavioral change.

I saw an excellent example of how old, worthless mobile phones are turned into travel guides in one Spanish city. They’re pre-loaded with data and an app to explore the city with. The results are fewer lost tourists, reusing an otherwise redundant resource, and immersive storytelling about the city — a great creative way to solve multiple problems. There are so many creative energies in this city that I am sure we could come up with something equally brilliant.

The Vietnam National Administration of Tourism’s website already has some information on Green Travel in Vietnam available — a great addition to the site — but we could be doing a whole lot more. Everyone could.

It’s tough to think about it right now, but having these conversations before tourism kicks off again and establishing a strategy to reopen responsibly will put Ho Chi Minh City at the forefront of the movement in Vietnam and open the eyes of international travelers.