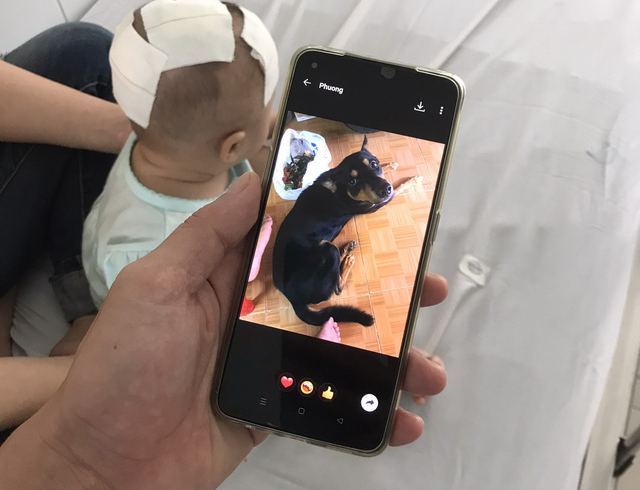 A six-month-old baby with stitches on her head and a picture of the dog that bit her. Photo: Ho Chi Minh City Children’s Hospital 2

Medical staff at Children’s Hospital 2 in Ho Chi Minh City have saved a six-month-old baby, who was bitten by a dog kept in her house, with the animal’s teeth piercing her skull and touching the surface of the brain.

The mother of V.N.B.Q. said that while learning to crawl at their house in Binh Thanh District, the six-month-old pulled the dog’s tail, prompting the pet to bite her in the head.

The family immediately took Q. to Children’s Hospital 2 in District 1.

Dr. Nguyen Ngoc Phi Doanh, who has treated many cases of head injuries caused by dog bites, assessed that the child’s wound was so severe, to the extent that the animal’s teeth pierced her skull and touched the surface of her brain.

“Most of the previous cases had the scalp torn, but this is the first time I have encountered a case like this,” Dr. Doanh said.

After checking the injury, the doctor and his surgical team cleaned all the damaged tissues and restored the injured site for the patient.

The doctor recommends that families carefully consider before choosing to keep a pet, especially families with young children, and create a safe environment for both the kids and the pet once they have decided to have one.