Heroes without capes: The unsung heroes of the pandemic 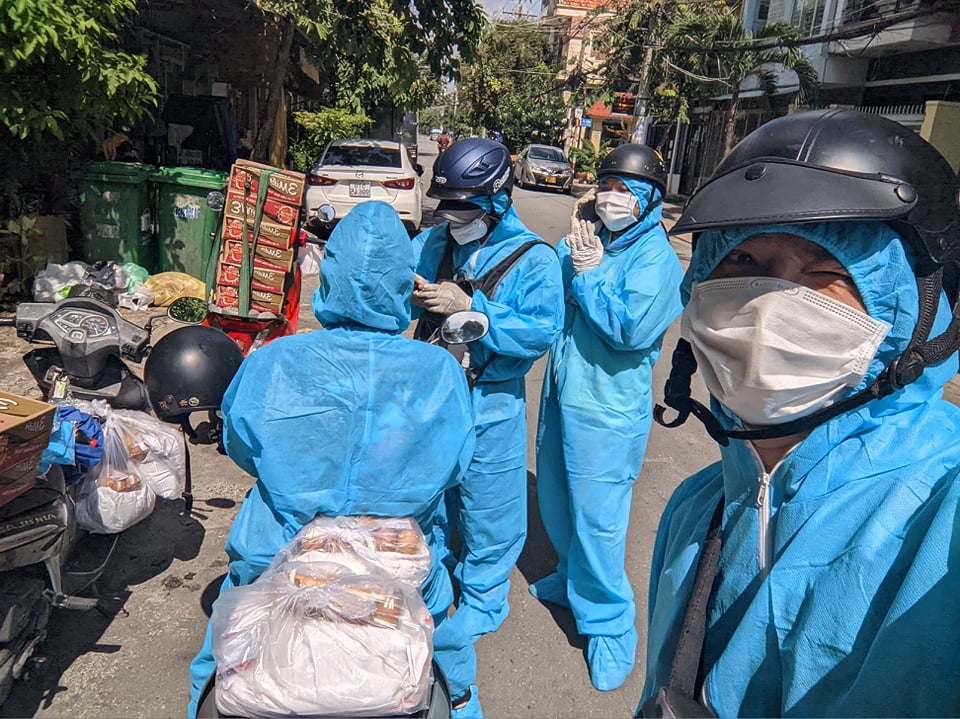 This illustration image shows volunteers of a charity group preparing for their trips to deliver packages of groceries to people who called for help in Ho Chi Minh City. Photo: Supplied

When the fourth wave of COVID-19 erupted in Vietnam, hundreds of companies, restaurants, hotels, and factories went belly-up, and millions of people lost their jobs. Now, with the pandemic under control, Ho Chi Minh City is gradually pulling itself up from the ashes.

While thousands of businesses across Vietnam were forced to shutter amidst the havoc of COVID-19, some owners chose to face the pandemic head on and pivot their operations towards a community-centered approach.

Joining forces to save the city

Dong Nguyen restaurant in District 7 was open for just a few months before the COVID-19 pandemic hit Vietnam.

According to Hua Tan Vinh, Dong Nguyen’s owner, the restaurant features a kitchen that is on par with international restaurant standards, odor and wastewater treatment systems, and highly trained management and staff.

When strict COVID-19 social distancing regulations were mandated in the city, Dong Nguyen was forced to close its doors.

Unable to sit idly and watch as the severity of the pandemic continued to increase in the city, Vinh made a difficult decision: he would use the few staff members who had stuck around to reopen the kitchen and begin making high-quality meals for Ho Chi Minh City’s frontline doctors and nurses.

Despite earning no profit for several months, Dong Nguyen operated at full capacity, serving 700 to 800 meals per day to healthcare workers.

Despite losing a massive amount of money over the course of the pandemic, Vinh was optimistic once Dong Nguyen was permitted to reopen.

Dr. Cao Xuan Minh, the CEO of Ngoc Minh Medical Clinic, is another unsung hero of the pandemic.

Always on the go, Dr. Minh spent the pandemic finding whatever ways he could to contribute his expertise to the fight against COVID-19.

When the city rolled out its vaccination campaign, he signed his chain of clinics up as vaccination sites in District 6, District 11, and Binh Tan District.

More than 40 medical technicians from among his staff volunteered to provide training, prepare the clinics for vaccinations, transport vaccines, and perform medical checkups before and after vaccinations.

Minh’s outlook on the pandemic is both optimistic and pragmatic.

The volunteer team from Ngoc Minh Medical Clinic’s volunteer team was committed to aiding the city’s vaccination campaign and, when strict social distancing measures were lifted in the city, they returned to work as usual.

“The city suffered significant economic and human losses. I had to give it my all,” Minh shared.

“If there are still people standing, there is hope for everything.”

COVID-19 forced Khong Gian Dep Construction Company to suspend operations in early July, putting the brakes on hundreds of ongoing construction projects and forcing hundreds of workers to sleep and eat on site.

Dam Ha Phu, the owner of Khong Gian Dep, used the time to send supplies and vaccination information to his staff so that they could quickly get back to work.

In the meantime, he launched Lac Xoong Market – a volunteer group that spent the closures distributing supplies and food to thousands of needy people in restricted locations.

Each day, Phu’s car was transformed into a cargo truck and loaded with soy sauce, fish sauce, and vegetables for the needy.

Though he had no idea how long the epidemic would persist or how terrible the devastation would be, he knew he had to help his city survive and thrive in the face of adversity.

Now, though things have returned to normal, his construction company has yet to receive many new contracts, and the operating costs for his old contracts have increased.

To keep the company up and running, he has had to reassess the scope of work on each ongoing project in order to reduce expenses.

When asked about the difficulties of recovering from the pandemic, Le Tan Hung, CEO of a packaging company, chuckled and said that as long as his staff are breathing, they will continue to be optimistic.

Vinh, Dr. Minh, Phu, Hung, Thuan, and many more businessmen have risen up and pushed themselves forward because there are still tens of thousands of workers behind them.

And now that the city is back to bustling, though the virus still lurks in the shadows, the city will, once again, thrive.