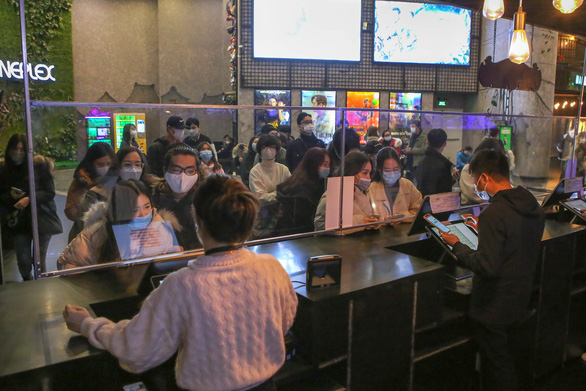 Film lovers in Hanoi finally had a chance to feel the experience they had been longing for as cinemas reopened on Thursday after a nine-month closure to prevent COVID-19 spread.

The decision followed a proposal by the municipal Department of Culture and Sports, which had received a petition asking for permission to resume business from cinema operators in the capital city.

The petition emphasized that people have high demands for entertainment and cultural activities during the traditional Tet holiday and the ‘new normal’ phase, according to the Vietnam News Agency.

Hanoi is one of the most important markets that occupy the lion’s share in the film industry in Vietnam, the petition stated.

Hundreds of young movie buffs queued up for tickets during their office break on Thursday, Tuoi Tre (Youth) newspaper journalists reported from a cinema on Pham Ngoc Thach Street in Dong Da District.

“I would go to the cinema several times a month prior to the pandemic, which made me itching to watch movies on big screens during the recent lockdown,” said Dao Quoc Huy, a cinema-goer from Dong Da District.

“It has been more than nine months since I last visited a cinema hall in Hanoi, so my friends and I are delighted to be back here.”

Huy and his girlfriend often enjoyed their weekend together in front of the big screens before the COVID-19 crisis shut down movie theaters.

Upon hearing that cinemas would reopen after the long pause, they decided to satisfy their thirst for movie-going experience right away.

Cleaning and equipment maintenance at cinemas had been finished before the opening day to ensure service quality and safety for the audience, said Le Thi Thuy Hang, manager of a cinema on Pham Ngoc Thach Street.

She said that the cinema sold more than 2,000 movie tickets on Thursday, which was a promising sign for a fruitful year of the industry.

“Since yesterday morning, we have been working hard to deliver the best service, as well as online booking instructions to the audience,” Hang emphasized.

Cinemas in the capital city had been shut down since May 5 last year due to the serious coronavirus outbreak.

According to the Ministry of Health, viewers are required to receive at least two doses of COVID-19 vaccine and strictly abide by safety guidelines, including donning face masks, washing hands with sanitizer, and keeping a proper distance.

In the meantime, cinemas only operate at half of their capacity for the sake of the audience’s safe distance.