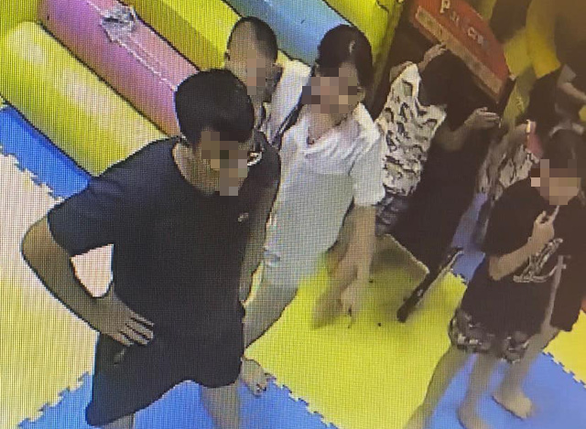 Police in Hanoi have summoned a local man for an investigation into his slapping a kid in revenge for the little girl throwing a ball at his child at an indoor playground in Hanoi this week.

Vu Trong D. was identified as the assailant and was taken to the police station where he confessed to hitting the girl after she threw a plastic ball at his child’s face.

The 34-year-old resident of Thanh Tri District in Hanoi was summoned by the Hoang Mai District police for an investigation on Thursday afternoon.

That same day, N.T.A, the father of the slapped girl, told Tuoi Tre (Youth) newspaper that his family had sent a formal complaint about the violence, together with relevant video clips, images and evidence, to police officers.

A video had gone viral on Facebook earlier on Thursday, showing D. slapping the four-year-old girl several times in the face.

After being notified of the physical assault, police in Hoang Liet Ward, Hoang Mai District quickly launched an investigation into the matter.

The leader of Hoang Liet Ward’s police unit told Tuoi Tre the same day that there was an ongoing probe into the assault.

According to the viral video and accompanying description, the four-year-old girl visited ADCBook Children’s Playground with her mother on Tuesday.

When the two returned home, the mother realized her daughter was in panic and crying uncontrollably.

The mother returned to the playground, asking to review security camera footage and discovering that a complete stranger had hit her daughter several times.

The man’s assault was apparently in response to the girl accidentally throwing a ball at his child.

“My family and the police have taken my daughter to undergo an injury assessment,” the father said.

“We demand that police impose harsh sanctions on the man.”