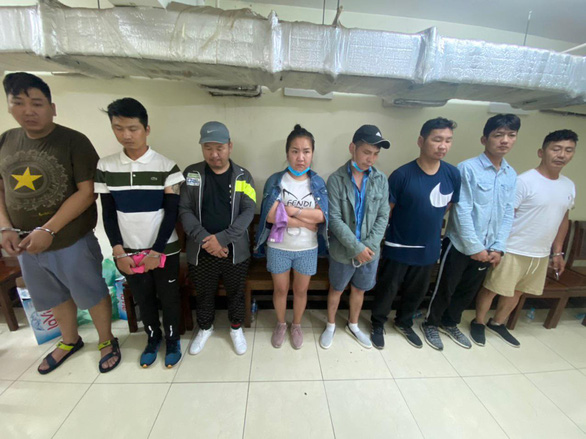 The eight Mongolian suspects in the theft happening in Hanoi on June 3, 2022 are seen in this image. Photo: An Thuy / Tuoi Tre

Vietnam’s Hanoi police have arrested a group of eight Mongolians suspected to steal assets from a Swedish couple in the capital city last week.

Police of the city’s Hoan Kiem District on Saturday said they have been investigating these Mongols who allegedly committed a theft in the district on June 3.

At noon that day, as the Swedish couple arrived at a restaurant on Ly Quoc Su Street for dinner, the husband hang his backpack, with a wallet inside, on the chair where he sat.

At the same time, four Mongolian nationals came in and sat at the next table, but they did not order foods or drinks and left several minutes later.

When the couple returned to their hotel, the husband received a text message informing that an amount of money equal to VND1 billion (US$43,150) had been withdrawn from his bank account.

He checked his backpack and found his wallet, which contained ATM cards and personal papers, had been gone.

They reported their loss to the district police, who immediately launched an investigation into the case in conjunction with the city’s police and other forces.

During their investigation, police determined that the Mongolians at the restaurant were the suspected thieves.

Through coordination with other agencies, the police later identified their temporary residence in Hanoi, but when police officers came, all the foreigners had left.

Continuing the search for the suspects, police found one of them at the Hoan Kiem Lake area on June 4, whereas other members of the gang had left for Ho Chi Minh City before going to southwestern Tay Ninh Province to seek ways to flee to Cambodia.

On the next day, a police team arrested another suspect at the Moc Bai border gate in Tay Ninh while another team detained the other Mongols at a hotel in the province’s Ben Cau District.

The suspects pleaded guilty of stealing the wallet of the Swedish couple.

They said they had used the credit card to buy gold and jewelries at several shops in Hanoi’s Hai Ba Trung District before selling the precious metal to a shop in Dong Da District for $21,700 and sharing the money among them.

This group told investigators that they had arrived in Vietnam with an aim to steal properties from foreign travelers.