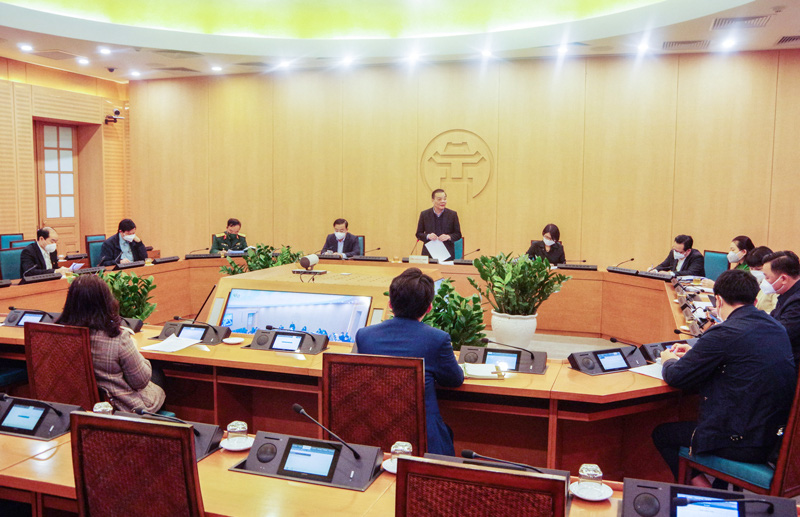 Chairman of the Hanoi People’ Committee Chu Ngoc Anh chairs a teleconference on pandemic prevention and control on February 27, 2022 in this supplied photo.

Health officials in Hanoi have warned of rising COVID-19 infections in the Vietnamese capital city over the next weeks, which may also lead to an increase in hospitalizations and pressure on the healthcare system.

Hanoi recorded an average daily jump of 9,226 from February 23 to 26, a sharp rise compared to only 5,128 cases several days earlier, deputy director of the city’s Department of Health Nguyen Dinh Hung said at the meeting.

The number of new patients will continue to climb in the coming weeks, Hung continued.

Although the pandemic is still under control in the city, the surge in infections will result in rising hospitalizations, which puts more pressure on the local healthcare system, the official elaborated.

Municipal and local authorities, as well as the political system, should exert more efforts to assist in the treatment of seriously-ill COVID-19 patients, especially children, according to Tran Thi Nhi Ha, director of the Hanoi health department.

The number of severely-ill patients accounts for about five percent of the city’s tally, Ha added.

Chairman Anh believed that the city will face more difficulties and challenges in pandemic prevention and control in the coming time.

Competent authorities have been expediting the genome sequencing process to look for the Omicron strain, which was designated by the World Health Organization (WHO) as a variant of concern in November 2021.

“Although the final result has not been concluded, it appears that both the Delta and Omicron variants have been circulating in Hanoi, which explains the rapid spread of the virus,” the chairman remarked.

Nearly 6.1 million out of eight million people in the capital city have received their first vaccine dose, while more than 6.2 million have been jabbed twice, according to the national COVID-19 vaccination portal.