Some content in the general plan for Hanoi (Plan 1259) has become outdated after 10 years, hindering the city’s development. 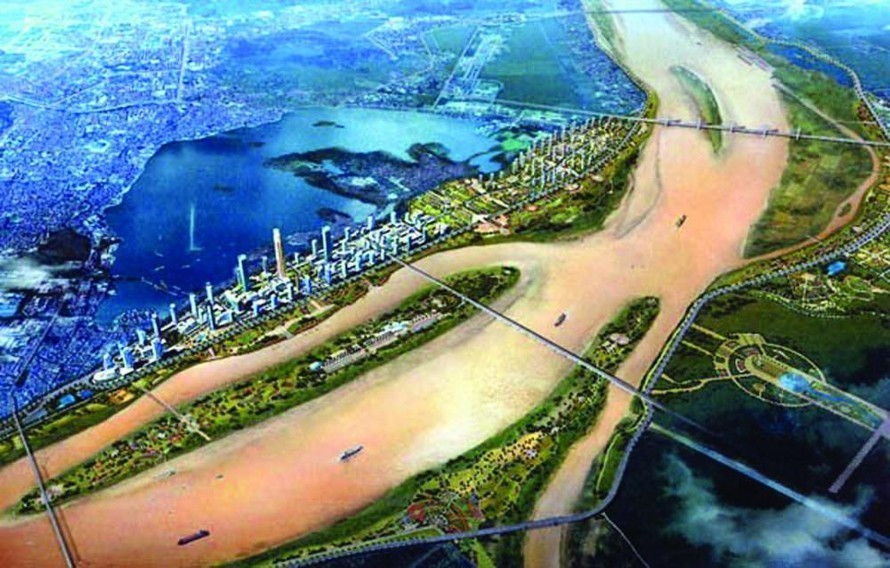 In 2007, Hanoi publicized the planning of the city by the Red River. Though it was controversial, it was included in the general study for Plan 1259.

Under the 2019 Law on Urban Planning, the Ministry of Agriculture and Rural Development (MARD) asked Hanoi to draw up a plan on natural calamity prevention and control and response to climate change. The city had to identify types of natural disasters, impact on every area, and zones for natural disaster risks (floods, flash floods, drought, water shortage, landslide, saline intrusion, etc)

The demand for water for production and daily use of 30 million people living in the Red River and Thai Binh River basins had to be specified under the national plan on water security in the face of challenges from climate change and 80 percent of the Red River water coming from outside the territory.

The design depended on national water resources planning for the Red and ThaiBinh rivers to 2030, with a vision towards 2050, compiled by the Ministry of Natural Resources and the Environment (MONRE). To date, the planning has not been made public.

One question involves how to identify areas that would allow water flow in the flood season, and areas that need to store water in the dry season. But it is unclear how much water the Red River has.

Another concern centers on Hanoi hurrying to draw up urban areas and residential quarters on land where there should be river embankments. If land is allocated to businesses for real estate and commercial projects, there will be no more public land to store clean water for 30 percent of the country’s population.

What is more confusing is why Hanoi is hurrying to call for designs for an expensive bridge across the Red River as the river water volume is still unclear. The city has organized a competition for bridge design, but the bridge is not listed among the projects with investment priority.

To find answers, Hanoi needs to publicize all the information related to subdivision planning (it is approved, but there are no attached drawings); capital planning; and Plan 1259 adjustments, so that all relevant experts can analyze and discover shortcomings in the planning.

In March 2020, Hanoi issued a plan to implement preparation for drawing up City planning in 2021-2030 with a vision towards 2045 (Capital City planning). The Hanoi Planning and Investment Department was assigned to join forces with local authorities and the consultancy unit to implement the task within 24 months.

By January 2022, the planning task had not been approved but the work had been reported as “basically implemented”. It is expected that there are 66 contents integrated in 36 branches and fields, and 30 district-level plans. The estimated expense is VND140 billion, but there is still no guidance on spending management, and the workforce is limited.

It’s clear that the multi-field integration planning method remains unfamiliar to management and consultants. Many experts have offered suggestions, but they lack the capability of describing how to turn the plan into reality.

After five months of implementation of the Law on Urban Planning, the method of implementation is still unclear. Under the multi-field integration planning method, many experts with in-depth interdisciplinary knowledge need to join others to implement the planning.

Meanwhile, single-disciplinary experts are drawing up urban planning according to the old way. This explains why Hanoi has not made any progress over the last two years since it was assigned to implement capital city planning.

In May 2021, Hanoi assigned the Department of Planning and Architecture to assess the planning and implementation of Plan 1259; check the status of population and development capability; and analyze problems and make proposals on new planning.

While waiting for the two ministries to draw up the new planning, Hanoi approved 66 out of 68 subdivision plans designed in accordance with the old planning (Plan 1259). The subdivision planning is a basis for drawing up detailed planning, investment projects and land allocation.

This means that subdivision plans were designed before an overall plan was designed. So, what will happen if there is a conflict between the detailed plans and the new overall plan?

Meanwhile, many contents of Plan 1259 are now out of date.

For example, the plan includes the development of 10 urban railway routes with a length of 460 kilometers, including five routes with a total length of 289 kilometers by 2020. In fact, only 4.1 percent of the initial plan was implemented by 2021.

The plan says the capital city would have five satellite urban areas with a total investment of billions of dollars, but none of these areas has been completed.

Hanoi plans to build three urban railway lines in the next five years.

The Cat Linh – Ha Dong elevated railway project provides a lesson on public asset valuation. Selling and buying back infrastructure projects at their real value will allow the effective usage of resources.