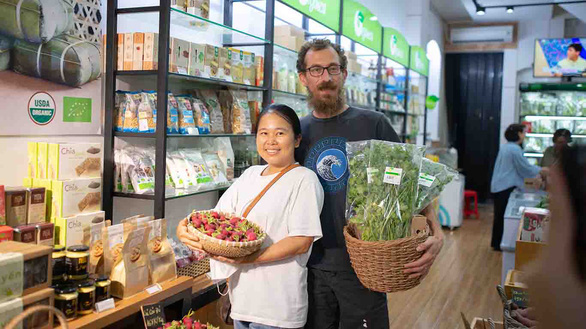 Starting as an IT technician, Marco Kranz married a Vietnamese woman, then decided to leave Germany for Da Lat City in the Central Highlands province of Lam Dong and become a reluctant farmer.

The audience of ‘Meet Our Farmer, Know Your Food,’ a program presented by Organica in Ho Chi Minh City were surprised at the amazing love story of Kranz and Tran Thi Hue, from Vung Tau City in southern Ba Ria-Vung Tau Province, which began from text messages on a dating app.

Hue has been living in Da Lat for 15 years and working as an agricultural consultant for Dutch seed companies.

The couple got acquainted on the first days of the ‘COVID-19 era’ at the end of 2019 through the dating app.

They had special feelings about each other though they were just chatting.

After their first meeting during Hue’s business trip to Europe, they reached a deal that Kranz would come to Vietnam to experience the Lunar New Year, or Tet, holiday and Hue would celebrate Christmas in Germany the next year.

In early 2020, he arrived in Vietnam to enjoy the traditional Tet holiday as promised.

“Her father continuously asked me three questions: Was our relationship serious? What were our plans? When would we get married and have babies?” the German remembered.

In March 2020, Hue again went on a business trip to Europe.

She was stuck there for months due to the pandemic but it was an occasion for them to learn more about each other and the second part of their deal was realized as Hue spent Christmas in Germany that year.

Kranz captivated his wife thanks to his sense of humor and knowledge of technology, while Hue won the heart of her husband with a vegetable garden on a terrace.

“I had nothing to do during the pandemic so I bought soil and seeds and turned the terrace into a garden with multiple kinds of vegetables and fruits.

“There were so many vegetables and fruits that his family and their neighbors did not need to buy vegetables at supermarkets during the health crisis.”

In August 2020, they got married in Germany.

Kranz decided to quit his stable job as an IT technician in his homeland and followed his wife to Vietnam.

The couple chose to build their home in Da Lat in January 2021.

They rented a greenhouse measuring some 2,500 square meters to develop an organic farm.

Beginning at the time the country was imposing a strict lockdown to fight against the pandemic, they encountered great difficulties in realizing their plans.

Overcoming the difficulties, Kranz developed an underground wastewater drainage system in their organic garden, called Max Organic, named after his son, to prevent water from adjacent gardens from entering it, thus barring chemical residues from other gardens as well.

He spent weeks creating a greenhouse management app for his family’s garden.

Based on basic requirements for temperature, air humidity, light, weather, and trees provided by Hue, the app will automatically systematize indicators and work out appropriate adjustments through a sensor.

By applying information technology, the couple can easily supervise, control, and regulate the operations of Max Organic despite staying far away.

“It is difficult for an IT technician to work as a farmer in a foreign country, but I have my family and am loved. I’m happy now,” the German man said.

“The weather in Da Lat is so nice and people here are so friendly, which has motivated me.”

Hue has divided the Max Organic garden into two areas, with nearly half of it being used for cultivating Hana strawberries, of Japanese origin, and the remaining for planting vegetables such as chili, lettuce, and radish.

All vegetables and fruits are grown in an organic manner without using fertilizers and pesticides.

However, the garden was almost damaged by pestilent insects after the first crop, which could not be remedied with bio-products.

Local consumers’ demand for clean agricultural products is increasing, especially after the COVID-19 pandemic has been kept at bay in Vietnam, according to Hue.

Despite the potential, it is hard to develop organic agriculture in general and apply it in Vietnam in particular, as that requires a deep understanding of cultivation techniques, organic production processes, fertilizers, and other products.

“I sent samples to the Netherlands for testing as per Europe’s organic standards and all met the criteria,” Hue said.

“This is the first achievement for our great efforts in producing organic agricultural products.”