From farmers to ‘models’ 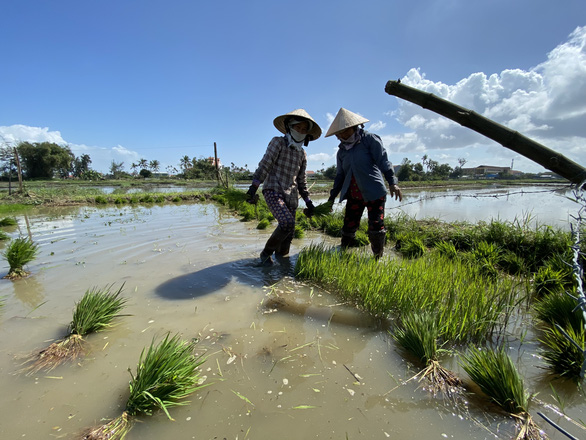 Thiet and Ban, two female farmers, demonstrate how to pull young rice plants and plant rice in the field leased by an entrepreneur for tourism in Hoi An, in a photo provided

Everyone knows a typical day in the life of a farmer includes planting rice, spraying insecticides, digging irrigation, and harvesting crops. But did you know famers in Vietnam are pulling in extra cash by working as photography models in their own fields?

Farmers in central Vietnam’s famed ancient city of Hoi An are taking to the fields, but for the reasons you might not think.

Every year, during the first few days of spring, photographers descend on Hoi An to ask local farmers to pose for photos in their fields. While the farmers appreciate the novelty of their “modeling” gigs, they also admit the extra cash does not hurt.

Doing a job they already have

Pham Vu Dung has spent the past month renting a 2,000-square-meter rice field from families in Thanh Tay Hamlet, Cam Chau Ward, Hoi An City, where he not only pays rent, but also pays local famers to…farm.

Yes, it might sound bizarre to pay famers to do a job they already have on land they already own, but Dung’s investment is not in the rice field, it’s in the opportunity to offer customers of his tourism company – Hoa Hong – a chance to take photos of the farmers preparing a new harvest.

Among the farmer’s Dung hires is Na, whose main job is to care of a herd of buffalos Hoa Hong keeps in the rice fields for tourists to take photos with.

Na’s duties include making sure the buffalos are clean and smell nice before customers climb atop their backs to take photos. He also guides the buffalos as they do their traditional job of plowing the fields. It’s the same job Na would probably be doing if Hoa Hong had never found it, but instead of worrying about the upcoming harvest, Na merely needs to interact with customers and put smiles on their faces.

Dung also owns a constantly busy restaurant overlooking the rice fields, where customers can enjoy the scenery while they eat.

The daily work is appreciated

Transitioning from farming to “modeling” for tourists is becoming more and more common in Hoi An, where scenes of hardworking farmers against a backdrop of yellow rice fields are now a trademark of the ancient city.

Nguyen Thi Ban and Nguyen Thi Thiet are two of these “models.” Both Ban and Thiet work part-time at Hoa Hong’s restaurant where they farm a small area of the company’s field and receive VND300,000 (US$13.22) per day in return.

“I use my free time to visit Hoi An and grow rice. It’s really nice to both work and be photographed at the same time,” Ban said.

Among the cafes which overlook Hoi An’s rice fields, Moving House is perhaps of the most popular. The café’s owner, Nguyen Duc Xinh, is an architect who decided to transform a 1,000-square-meter property into a nostalgic coffee house.

Xinh’s cafe is not only attractive to customers because of its beautiful decoration and furnishings, but also because of the work that farmers do in the field every day in front of customers.

“When I decided to open a coffee house, I first met with the farmers whose rice fields are nearby. They understood my plan and agreed to “work” without any reward,” Xinh shared.

“One of them even gave me a field of about 1,000 square meters to grow rice. They get excited when they see visitors taking photos of them at work and it inspires them to take better care of their fields,” Xinh explained.

After two years of operating his coffee house, Xinh now gives back to the farmers by giving them positions as employees at his cafe.

“They can continue to work in the rice fields, but also use their free time to work as waiters and receive a monthly salary,” he told Tuoi Tre (Youth) newspaper.

The field as a stage

Pham Huu, a resident of Son Pho 2 in Hoi An City, owns a 1,300-square-meter field that has been unused for many years. Recently, he was asked to work with a company and plant his field.

Huu decided to give his field to the company for a rental price of VND8 million ($352) per year.

“Normally, when I grow rice by myself, I make almost no profit. Now, if I lease my fields, not only am I paid annually, but my field is also maintained,” Huu explained.

In addition to Huu, several other farmers have also chosen to lease their fields to entrepreneurs. In addition to the lease, they are invited to do their traditional work in the fields as a way of entertaining tourists.

Under this model of cooperation, the farmers are responsible for plowing and growing rice, keeping the fields green, and cleaning the fields so that entrepreneurs can serve tourists.

At big events, the farmers are invited to perform their work for visitors. This new job gives the farmers an additional source of income.

Tourism in the fields is changing rural life

According to deputy chairman of Hoi An City People’s Committee, Nguyen The Hung, in addition to the traditional profession of rice farming, local people have found many new ways of farming that help them increase production and work in the tourism industry.

Hoi An authorities are determined to preserve the fields and the natural ecosystem to provide farmers with a stable source of income for rice cultivation and tourism.