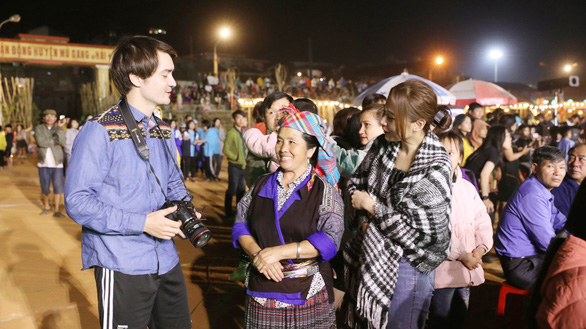 François Bibonne talks with a local woman while he makes his film, ‘Once Upon a Bridge in Vietnam,’ in a supplied photo.

After his Vietnamese grandmother passed away three years ago, François Bibonne was inspired to make a special journey back to her home country to understand his own origin.

As a young Frenchman with a history degree who has a passion for classical music, Bibonne would like to set out on the journey in his way: getting to know, exploring, and understanding his grandmother’s hometown in Vietnam through classical music.

His work, a documentary titled ‘Once Upon a Bridge in Vietnam,’ is in the final stages of completion in France.

He intends to release the film this winter as a gift to the country that continues to teach him new things each day.

Having a Vietnamese grandmother, Bibonne spent his childhood filled with unforgettable stories of Vietnam.

Among them were the foods, music, fashion, beautiful landscapes, and heroic tradition of fighting invaders.

But he had never been to Vietnam until his grandmother, Therese Nguyen Thi Koan, passed away three years ago.

The death of his grandmother prompted him to make a journey to Vietnam as soon as he had a chance.

Bibonne came to Vietnam at the beginning of 2018 under a project of a tourism company.

He paid a visit to the northern destinations of Hanoi, Sa Pa, and Ninh Binh then.

The Frenchman fell in love with the nature, people, and characteristic cultures at the places where he could set his foot in.

Bibonne did not want to just be a tourist in the home country of his grandmother, however.

He returned to Vietnam in early 2020 and stayed for 15 months to make his first documentary, ‘Once Upon a Bridge in Vietnam.’

He chose to tell his story through music, especially classical music, which is his passion besides history.

The filmmaker wants to travel through several provinces across Vietnam to explore the country’s classical music.

In fact, he did not know whether Vietnam had a symphony orchestra. With the idea of making the film in mind, Bibonne found his way through various provinces and cities such as Hanoi, Ho Chi Minh, Nam Dinh, Bac Giang, and Bac Ninh.

During the journey, he tried to make his documentary a musical story told by beautiful landscapes of the countryside throughout Vietnam.

He narrated the story of an old brass trumpet that had been carried by the French since the 19th century and can be seen now in the northern province of Nam Dinh.

The Frenchman presented another story of a violin class in a pagoda next to a paddy field in a village where there are many generations that enjoy playing the violin.

He shared what he knew about how the people living in Bac Ninh preserve folk songs, and his admiration when listening to stories recounted in French by musicians in Ho Chi Minh City.

Bibonne taught French and English to earn more money during 15 months of living and making the film in Vietnam.

He traveled to several provinces and cities across the country with a small camera to explore the hidden beauties of his grandmother’s homeland through his own passion for classical music.

The documentary has been under processing in a French studio and is expected to be released this winter.

About 10 percent of the raised fund will be used to finance a campaign to plant bamboo trees in the northern province of Yen Bai, where he shot some parts of the film.

Inspiring a love for real world

Bibonne primarily wanted to make ‘Once Upon a Bridge in Vietnam’ a documentary to help him better understand his roots when he started the project.

But now he likes to introduce his first film to as many young people in the world as possible after his visit to and exploration of such a beautiful and impressive Vietnam.

He would like to help them come to know that Vietnam has a special treasure of culture apart from its glorious history against invaders, which international media often focus on when talking about the Southeast Asian country.

To Bibonne’s mind, Vietnam is much more compelling and interesting than what he saw in some videos promoting tourism.

As a classical music fan, he wants to make the film as a gift to music lovers, especially the young Vietnamese generation.

He would like to remind them of the fact that their country is much more beautiful and heart-touching than the virtual world on social media that they have spent so much time watching every day.

“I hope that the young focus more on the interesting things in real life, where you are living in rather than the virtual world,” said the filmmaker.

Bibonne has a specific idea for the next documentary at the moment. He intends to relate a story about Vietnamese instruments and electronic music in the background of traditional and modern contexts.

In the future, he will visit the central city of Hue to get to know Hue Royal Refined Music, which was recognized in 2003 by UNESCO as a Masterpiece of the Oral and Intangible Heritage of Humanity, then the Central Highlands to learn about the space of ‘gong’ culture, which was certified as a Masterpiece of the Intangible Heritage of Humanity in 2005 by UNESCO.

His next project may be in Ho Chi Minh City.

François Bibonne is a resident of the French city of Fontainebleau.

His grandmother was of Vietnamese origin.

Bibonne learned to play the piano since he was a boy. Despite having played the instrument for 15 years, he did not pursue a music career as his original ambition.

He got a master’s degree in history from Sorbonne University.

Bibonne once worked as a media manager at the Fontainebleau Schools for Music and Fine Arts, a job that gave him a special love for music and film.

It is the love that inspires him to make ‘Once Upon a Bridge in Vietnam.’