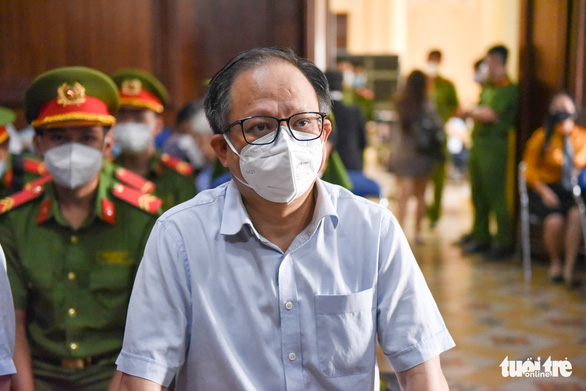 A Vietnam court has sentenced a former standing deputy secretary of the Ho Chi Minh City Party Committee, Tat Thanh Cang, to 10 years in prison for his violations in state asset management that caused a loss of over US$29 million to the city’s budget.

After a 12-day hearing, the Ho Chi Minh City People’s Court gave the sentence on Saturday to Cang, 50, on charges of “violations in the management and use of state assets that led to losses or wastefulness,” as prescribed in the Vietnamese Penal Code.

This jail term was lighter than the 12-to-14-year imprisonment previously proposed by the prosecutor for Cang, who was arrested in 2020.

He was then standing deputy secretary of the Ho Chi Minh City Party Committee.

Cang unlawfully wrote ‘approved’ in a report submitted by the city’s Party Committee Office seeking his opinion on Sadeco’s proposal to sell its nine million shares to Nguyen Kim Investment and Development JSC at a price of VND40,000 ($1.76) apiece.

Investigators pointed out that this price was lower than the real rate and had been based on a price evaluation made by a company without authorization.

This law-breaking approval by Cang had resulted in a loss of VND669 billion ($29.48 million) to the city’s coffers, the trial panel concluded.

The court emphasized that he played a decisive role in the case while the ex-Party official pleaded not guilty, saying he had acted within his authority and duties.

Tran Van Su, Cang’s defense attorney, also requested the court to declare his client innocent, as Cang was not assigned to manage and use the state assets at Sadeco.

Prosecutors and the trial panel rejected the arguments of Cang’s and his defender’s, affirming that he, in his capacity as the standing deputy chief of the local Party Committee, had to be responsible for managing public property.

In his last words before the court announced its judgments, Cang admitted his responsibility in causing such a loss to the city’s budget.

Te Tri Dung, former CEO of IPC and former chairman of Sadeco, and Ho Thi Thanh Phuc, CEO of Sadeco, were sentenced to 11 and nine years in jail for the same offense as Cang.

Dung was determined as the mastermind of the case as he had been involved in all the procedures that resulted in the unlawful sale of the shares to Nguyen Kim, while Phuc was proved to assist Dung in his violations.

Both were given additional jail terms of nine and seven years, respectively, for “embezzlement,” as their wrongdoings had led to Dung and others misappropriating over VND4.6 billion ($202,700) from Sadeco’s remuneration and reward fund.

Pham Nhat Vinh, former CEO of Nguyen Kim Investment and Development JSC, who was also prosecuted in the case, has been put on a wanted list after he fled abroad.

The court announced that Nguyen Kim had returned the payment for the nine million shares along with interest to Sadeco, while the entire embezzled amount had been recovered, according to VnExpress.