Former Hanoi chairman gets eight years for abuse of power 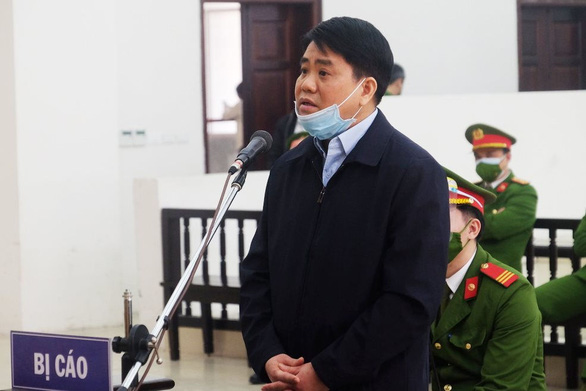 A court has sentenced an ex-chairman of the Hanoi administration to eight years in prison for power and position abuse, his second conviction this year.

The People’s Court of Hanoi on Monday gave the jail term to former chairman of the Hanoi People’s Committee Nguyen Duc Chung on charges of “abusing positions and powers while performing duties” in a case related to the illegal purchase of the water-cleaning agent Redoxy 3C to purify lakes in the Vietnamese capital city.

The court ordered the three defendants to jointly pay more than VND36.1 billion (US$1.57 million) in compensation to HSDC, which is the civil plaintiff.

The trial panel noted that Chung’s family had paid VND10 billion ($432,000) and Giang’s had also paid VND1 billion ($43,200) to the Hanoi Civil Judgment Enforcement Department as a partial settlement of the compensation.

According to the indictment, the Hanoi administration in 2016 directed relevant agencies to address water pollution in local rivers and lakes by searching for suitable advanced technologies.

Chung, the city’s chairman at that time, chose the water treatment technology of Germany’s Watch Water GmbH and placed an order for the production of the Redoxy-3C agent for use in the water pollution treatment after making a trip to Germany to visit the manufacturer.

However, he later instructed Hung to buy Redoxy- 3C through Asktic Co. Ltd., where Giang acted as the director, instead of purchasing the agent directly from the German manufacturer, with the intention of gaining personal profit.

Arktic is wholly owned by Chung’s wife, Nguyen Thi Truc Chi Hoa, and this company is in the name of their son, Nguyen Duc Hanh, as shown in its business registration certificate.

With the green light from Chung, Arktic bought Redoxy- 3C from Watch Water GmbH for around VND115 billion ($5.02 million) and resold it to HSDC for some VND151 billion ($6.6 million) to earn a difference of VND36.1 billion, the indictment said.

During the two days of trial, Chung repeatedly said he was innocent, asserting that he did not direct HSDC to buy Redoxy- 3C through Arktic and that he gained nothing from Arktic.

The court, however, affirmed that the evidence and testimonies collected during the investigation and the trial were enough for the conviction of the three defendants.

Together with a five-year imprisonment term Chung received on December 11, 2020 from the same court on charges of “appropriating state secret documents,” Chung has to serve a total of 13 years in jail.

Chung was then determined to be the mastermind of the theft of state secrets, which involved his three accomplices, who received jail terms ranging from 18 months to 4.5 years for the same crime.

The four stole confidential documents of an investigation into a scandal related to Nhat Cuong, a technology firm and mobile phone vendor, which was still under investigation for smuggling, accounting violations, money laundering, and bidding violations, all causing serious consequences, according to a separate indictment.

Such documents were considered by police as state secrets.