Forest in central Vietnam sustainable thanks to communal efforts 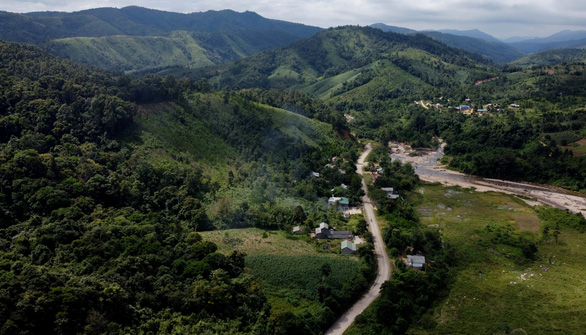 For the last five years, a 600-hectare forest in central Vietnam has maintained its sustainability thanks to efforts from the local authorities and community.

Conservation has been balanced with production in the forest in Chenh Venh Commune, Huong Hoa District, Quang Tri Province, keeping both the woods and its dwellers alive.

The Forest Stewardship Council (FSC) – a non-governmental organization based in Germany – has recently issued an FSC certificate to Chenh Venh Forest based on their detailed principles and standards with 200 criteria.

This forest is the first in Vietnam to have received this honorable title.

According to Nguyen Dinh Dai, head of the Medical Committee Netherlands-Vietnam (MCNV), Vietnamese people have long thought of forests simply in terms of wood production.

“The sustainability of the forest comes from a harmony between economic, environmental, and social gains.”

Elderly people in Chenh Venh Commune said that the Chenh Venh Forest has existed at the foot of Mount Sa Mu for hundreds of years.

During wartime half a century ago, this was a forest untouched by humans.

Since the Bru-Van Kieu ethnic minority settled down by the Chenh Venh stream that flowed past this forest, the greenwood was given its current name.

The Van Kieu people survived in the forest with its rich food resources and were not threatened by outsiders.

However, life brought about unprecedented changes, especially at a time when the forest was not under the supervision of the Huong Hoa District authorities.

The primary forest of Chenh Venh suffered from illegal logging.

In 2017, the Huong Hoa District authorities officially placed the forest under the protection of Chenh Venh Commune.

This marked the start of its resurrection.

Ho Van Chien, head of the Chenh Venh Commune Forest Protection Committee (FPC), noted that they formed a board of communal forest protection immediately after this decision.

One interesting fact was that almost all the families in the commune had a representative on this committee.

There were four administrative officers, three supervisors, and seven protective units with five members in each.

All of them were Van Kieu ethnic people.

The Chenh Venh FPC conducts three to four patrols every month with troops of five members.

Depending on the patrol site, they might be reinforced with extra members.

Patrol officers will contact the local authorities whenever there are signs of illegal logging.

The FPC has also issued guidelines on forest protection, which forbid the logging of softwood and hardwood trees.

However, the exploitation of bamboo and herbs is allowed.

“The Van Kieu people have long relied on the forest,” said Chien.

“It is challenging to make these rules stick, but these people have been following them well for the last five years.

The Chenh Venh FPC has been operating for the last five years without sponsorship or funding. Its members are all volunteers.

The tough task in its mission to protect the greenwood is to balance between protection and production.

Once this can be achieved, sustainability will ensue, according to Phan Ngoc Long, chairman of the People’s Committee in Huong Phung Commune.

He said that entrusting the Chenh Venh Commune with such a big task seemed like a dubious decision at first.

What the people have achieved, however, proved the effectiveness of their dedication and hard work.

The ethnic people have shifted their focus to businesses that place minute effects on the forest.

They have produced bamboo handicraft and herbal products instead of forestry.

The Chenh Venh Commune is currently no different from an eco-tourism village with numerous household producers of unique Van Kieu-style products, like bamboo drinking mugs and long pipes peculiar to their culture.

Their success has spread through the news and they have found support.

The European Union and the MCNV in Quang Tri have assisted the ethnic people here in their production.

Thanks to this, the Van Kieu people’s handicrafts have made their way to new markets.

The commune itself and the nearby Chenh Venh waterfall have been adapted into tourism sites.

According to Dai, head of the MCNV, the Chenh Venh Forest receives no financial support for protection because it is not located in the vicinity of an electricity dam.

“This is the largest hurdle for the local people because they have to make a decent living while keeping the forest alive,” he added.

“But they have done it and won their FSC certificate.”

The Chenh Venh Forest was visited by the GFA, an independent assessor, after the FSC had nominated it to receive their certificate.

Nguyen Van Bich, a GFA inspector, emphasized that the most important criterion of an FSC certificate is not the biodiversity of the forest, but the sustainable exploitation from its community.

In other words, the economic and social values are to be considered alongside the protection of the forest.

The Chenh Venh Forest passed the examination and has been awarded the certificate, as well as plans for production and sustainable exploitation from the FSC.

Before FSC, the local products were selling, but with this certificate, they could be more easily connected to large markets overseas like European countries.

“This certificate is like a passport for products from Chenh Venh Commune,” said Bich.