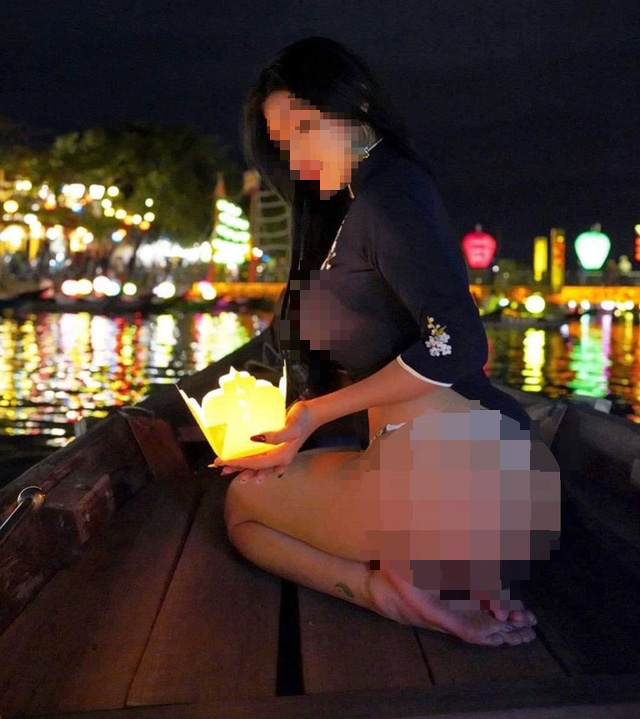 A Malaysian visitor wears the Vietnamese ao dai without trousers in a now-deleted photo.

A Malaysian visitor has posted a public apology after sharing a photo of her wearing the Vietnamese ao dai without trousers during a boat ride in Hoi An Ancient Town, a famous destination in central Quang Nam Province, earlier this week.

The tourist, who is a popular model and influencer, apologized in Vietnamese, English, and Chinese on her Facebook page on Wednesday.

“There was a posting of mine that truly upset the people, and I deeply and sincerely apologize for my actions/content and the disrespect to the traditional culture of Vietnam,” she wrote after taking down the photo.

In the photo that she posted earlier this week, the Malaysian visitor was donning a Vietnamese ao dai without pants while riding a boat along the Hoai River in Hoi An Ancient Town.

The woman also made a sensual pose while holding a candle-lit lantern, exposing her undergarment.

The ‘ao dai‘ is a Vietnamese traditional outfit, worn by both sexes but now most commonly put on by women. In its current form, it is a tight-fitting, double-flapped silk tunic worn over trousers.

The photo received hundreds of thousands of comments, most of which were criticizing and demanding that she remove the photo and apologize.

In 2019, a young Vietnamese woman received a lot of backlash after appearing in a short video in which she was posing without a shirt and her jeans unbuttoned on top of a building overlooking Hoi An Ancient Town.

She then had to delete the video and extended an apology for her action.

Located in Hoi An City, Quang Nam Province, Hoi An Ancient Town is a well-preserved example of a small-scale trading port active between the 16th and 19th centuries.

The 30-hectare town, with a buffer zone of 280 hectares, was recognized as a UNESCO World Heritage Site in 1999.