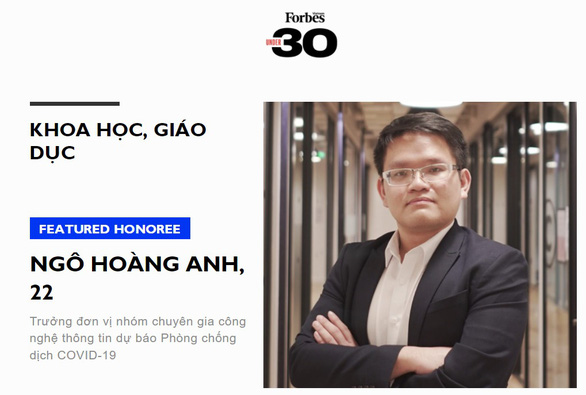 A screenshot of Ngo Hoang Anh’s listing on the 2022 Forbes Vietnam 30 Under 30 list. Anh was removed from the list on February 24, 2022 over sexual harassment allegations.

Forbes Vietnam has removed Ngo Hoang Anh from its 2022 30 Under 30 list, according to a statement released by the magazine on Thursday.

Forbes Vietnam reached its decision to take down Anh, 22, from its annual 30 Under 30 list after “carefully considering all aspects of the issue, including the inspirational spirit of the list and Ngo Hoang Anh’s wishes in an email sent to the magazine,” the publication said on its website.

Forbes Vietnam chose not to release the content of Anh’s email.

Anh is currently studying for a master’s degree in statistical epidemiology at the Medical School of the University of Edinburgh in the UK.

On February 14, the magazine published its annual 30 Under 30 list honoring 26 people, including Anh, in the category of science and education.

Anh being named there has triggered public anger, especially after his alma mater, High School for the Gifted in Ho Chi Minh City, congratulated him on Facebook.

The school’s post stirred up a debate on the social media site after several former female students of the school accused Anh of sexual harassment.

These students claimed that Anh had used “insensitive and sexually explicit” words in text messages he sent to them while studying at the school.

These messages, which the former students claimed were sent by Anh, have since been widely shared on Facebook, triggering a public outcry.

Last Saturday, the school removed the post and issued a public apology in which vice-principal Tran Nam Dung said the school’s Facebook page had been careless in publishing its congratulations to Anh given that the female students had previously spoken out about his sexual harassment.

The school administrators said it had “failed to comprehensively and rigorously deal with the matter when accessing information released on social media in 2020 related to its students’ accusations of Anh alleged sexual harassment.”

They also admitted to having failed to take specific measures in the past to help students protect themselves against sexual harassment, as well as failing to support individuals who had reported facing sexual harassment.

“We express our deepest sympathies to students and former students who have suffered from the pain caused by such behaviors,” the school said.

“We are committed to fully implementing our responsibility to related parties to settle this matter in accordance with the law.”

Most of those who spoke out against Anh are alumnae at the school.

One of them is N., who told Tuoi Tre (Youth) newspaper that she was a student at the school in 2018 when Anh sent her sexually explicit text messages.

Anh asked her to send him a video of her undressing or ‘partially undressing,’ according to N.’s account.

She added that Anh would often try to talk to her about sex or push conversations toward sexually explicit topics.

Another former classmate, S., also claimed to have been sexually harassed by Anh.

On February 17, a group of former students from the school sent an open letter to the school’s leaders asking the administration to work on enhancing awareness about sexual harassment prevention on campus.

They advised the school to organize training sessions for teachers and other staff on how to respond to cases where students or teachers are victimized by abuse or sexual harassment.

“By this letter, we want to extend a message to schools and society that sex education and sexual abuse prevention are issues that should not be disregarded,” said Doan Tuan Khoi, an alumnus at the school and currently a fifth-year student at Pham Ngoc Thach University of Medicine in Ho Chi Minh City.

Forbes Vietnam, which provides business news and insights about influential people and companies in the Vietnamese economy, annually issues a list of 30 Under 30 to honor Vietnamese people under 30 years old who have gained prominent achievements in four categories: business and startup; science and education; social activities; innovation, art, entertainment, and sports.