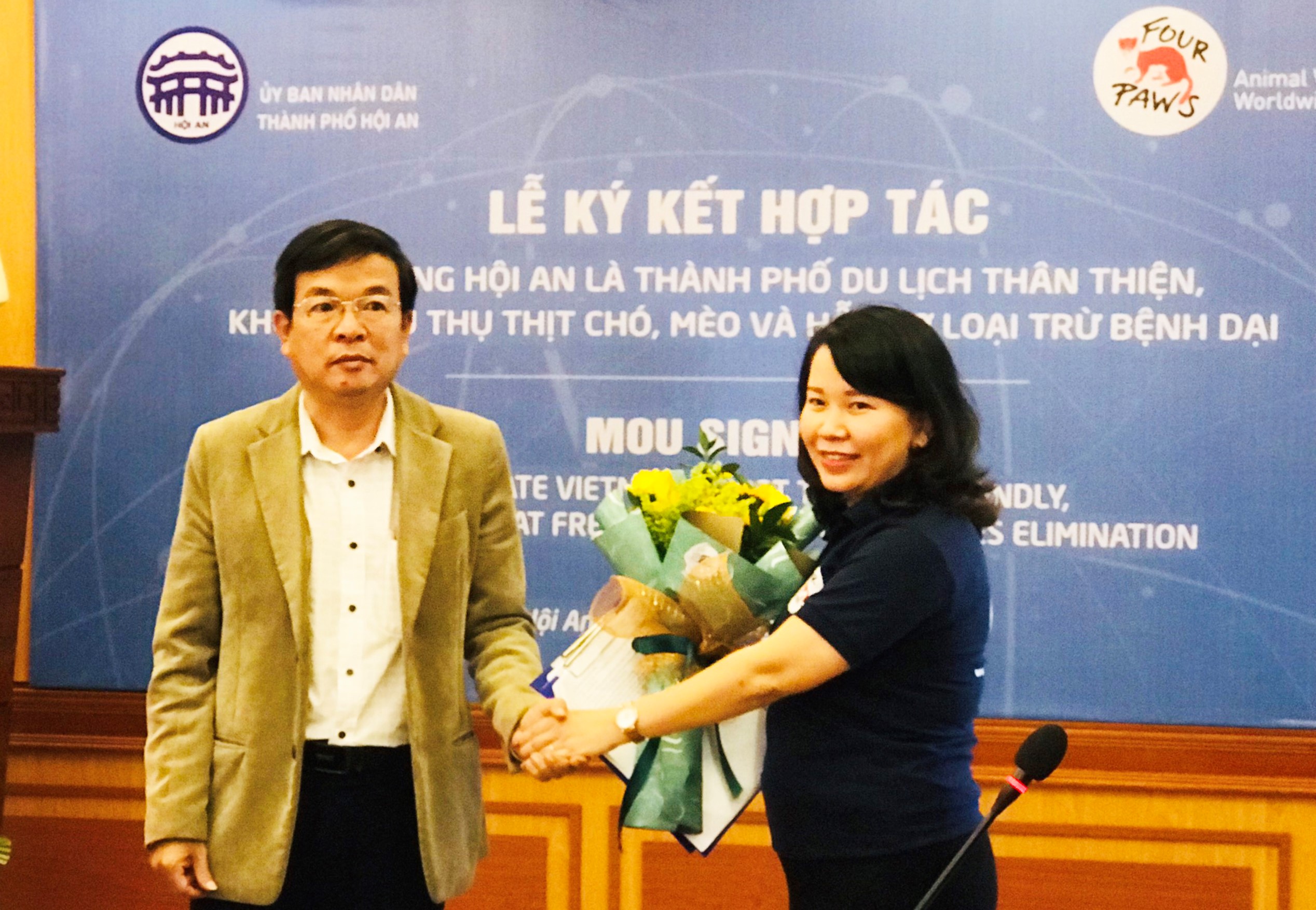 Officials shake hands during the signing of a Memorandum of Understanding against the consumption of dog and cat meat in Hoi An City, Quang Nam Province, Vietnam, December 10, 2021. Photo: Q.T. / Tuoi Tre

Hoi An City, a top destination in central Quang Nam Province, has become the first locale in Vietnam to disapprove of the consumption of dog and cat meat, following the signing of a Memorandum of Understanding (MoU) with a global animal welfare organization on Friday morning.

Authorities in Hoi An had worked with FOUR PAWS, the global organization acting for animals under direct human influence, throughout this year before the two sides reached the MoU, in which the former is committed to taking drastic actions to end its dog and cat meat trade and consumption.

The MoU, effective for two years starting the end of 2021, also emphasizes the goal of improving animal welfare through vaccination and rabies eradication programs, helping to avert a pandemic outbreak, and developing Hoi An as a tourist-friendly city.

City authorities have realized that it is impossible to eradicate rabies without thoroughly eliminating dog and cat meat trade.

Their initial actions will thus include a campaign to raise local public awareness and rescue dogs and cats from slaughtering and selling, while providing animal healthcare services and enforcing regulations to end dog and cat meat trade can be the follow-ups.

Each year, Vietnam has more than five million dogs and one million cats trafficked and slaughtered for meat, endangering animal rights and public health and negatively affecting the image of the country in the eyes of international friends, according to FOUR PAWS.

The signing of the MoU on Friday is thus viewed as a progressive step toward refining Vietnam’s image, with Julie Sanders, director of FOUR PAWS’s companion animal department, hailing it as an important and groundbreaking activity in Vietnam and in the region.

Sanders expects that as Hoi An has pioneered, other locales across Vietnam will follow suit.

Only about 6.3 percent of Vietnamese eat dog meat, while 88 percent support a ban on the trade in dog and cat meat, according to a survey conducted by FOUR PAWS.

FOUR PAWS has been working closely with government agencies to achieve a prohibition against dog and cat meat eating, citing the reasons of animal cruelty, health risks from rabies, and the spread of zoonotic diseases to the community.