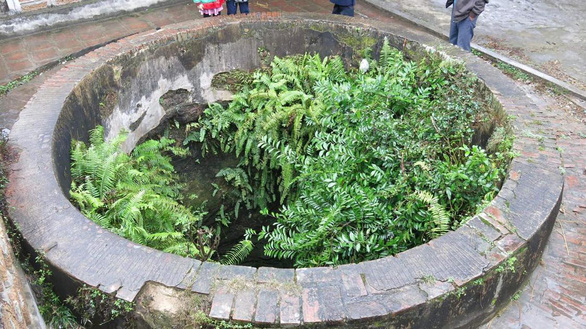 Residents of Duong Lam Village in Son Tay Town, Hanoi are upset that a film making crew painted on a national heritage ancient well for their shots.

The residents flocked to the Mong Phu communal house, where the ancient well is located, on Sunday afternoon, demanding the film crew cease causing damage to the relic.

The production team has been filming a comedy at the communal house over the past few days, according to G.V.A., a local.

As the film crew has annually shot a comedy in Duong Lam Village for several years, Phan Van Hoa, chairman of Duong Lam Commune, gave them approval by word of mouth this year.

Located some 50km to the west of downtown Hanoi, Duong Lam Village has been recognized as a national relic since 2005 as it has many houses dating back hundreds of years.

While many sites in the village are considered sacred spaces, the film crew painted an ancient well in the courtyard of the Mong Phu communal house, which is recognized as a national heritage site itself, without permission.

The unauthorized transformation, which turned the brick well’s peeled-off mortar layer covered by green patches of moss and ferns into a new honeycomb stone look-alike, has angered the locals in Duong Lam.

“How come a bunch of people from somewhere I don’t know blatantly damage such a national relic?

“Normally, any changes to it must be approved by the Ministry of Culture, Sports, and Tourism.”

Chairman Hoa told Tuoi Tre (Youth) newspaper on Sunday that he had neither received any proposals nor permitted the film crew to make any changes to the site.

Hoa said that local authorities have booked the case and suspended all filming activities of the production team in question, while requesting them to quickly restore the well to its original condition on Monday.

The fix is expectedly simple as the paint the crew used was lime wash, which can be easily removed.

The team was not required to pay any administrative fine, according to Hoa.

Truong Duc Thang, a representative of the film crew in question, admitted to the wrongdoing, pledging to learn from the incident while hoping for sympathy from local authorities and people to be allowed to complete the remaining scenes in the village.

Chairman Hoa said that on average, two film crews come and shoot their products in Duong Lam Village every month.

However, G.V.A. complained that those film crews brought almost no benefits to the local people, and instead left messes behind to be cleaned up by the residents.