Analysts forecast that Vietnam’s fertiliser industry will continue to grow in the short term thanks to opportunities to increase market share in the international market. 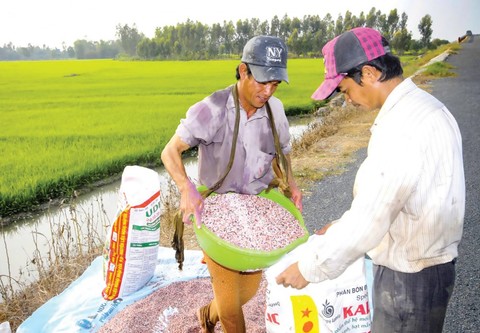 Many fertiliser enterprises reported strong profits in 2021 due to high fertiliser prices when demand spiked and supply dropped sharply. The increased demand for food reserves is also a positive signal for domestic fertiliser companies.

With this result, the company exceeded the revenue target by 54 per cent and achieved 8.2 times the profit target for the whole year. This was also the highest profit the company recorded in the past 10 years.

Petro Viet Nam Ca Mau Fertiliser JSC (DCM) in 2021 earned total revenue of VND10 trillion and profit after tax of VND1.82 trillion, an increase of 30 per cent in revenue and nearly 3 times of profit compared to 2020, respectively. This is also the highest business result in 10 years of operation.

With the above results, DCM exceeded the revenue target by 9 per cent and the profit target by 110 per cent for the whole of 2021.

This upward trend in price was driven by a global shortage of fertiliser supply and export-restrictive policies of countries such as China and Russia.

DCM has also officially put into operation the NPK fertiliser factory with a capacity of 300,000 tonnes per year, starting trial production from April 2021, significantly improving output in the year.

The Viet Nam Chemical National Group (Vinachem) announced that consolidated revenue last year reached a record of VND51.2 trillion, exceeding 16 per cent of the whole year’s plan and increasing 24 per cent compared to 2020.

According to the Plant Protection Department under the Ministry of Agriculture and Rural Development, in the first nine months of 2021, domestic fertiliser production reached 5.7 million tonnes, up 4.3 per cent over the same period in 2020.

In December, following the same trend of the world urea price, the urea price in Viet Nam increased 2.5 times over the same period last year, reaching VND18,000 per kilogramme. The World Bank forecasts this increase could last until the end of the first half of 2022.

At the end of 2021, China and Russia – two of the three largest fertiliser exporting countries in the world – decided to suspend fertiliser exports to stabilise domestic supply and control inflation. This decision may last until the end of the second quarter of 2022.

According to a report by IndexBox, in 2020, the three largest fertiliser exporting countries, including Russia, China and Canada, accounted for 35 per cent of total fertiliser exports worldwide.

Therefore, the export suspension of the two countries has a strong impact on the global fertiliser market and fertiliser prices are forecast to continue to peak in the first half of 2022.

According to Mordor Intelligence, a market analysis and consulting organisation, Viet Nam’s fertiliser industry will grow by 4.9 per cent per year in the 2021-2026 period.

In November, South Korea decided to import 10,000 tonnes of urea from Viet Nam. KIS Viet Nam Securities Joint Stock Company hopes that Viet Nam can take advantage of this rare opportunity to increase its share in the international market.

Besides, the increased demand for food reserves is also a positive factor for the fertiliser industry. The US Department of Agriculture forecasts total world rice consumption in the 2021-2022 crop year will reach 510.9 million tonnes, equivalent to the consumption in the same period last year.

However, the consumption volume of India – the world’s largest rice exporter, may reach 16.5 million tonnes, down 12 per cent compared to the same period last year.

Meanwhile, Viet Nam’s rice export output is forecast to reach 6.3 million tonnes in 2022. According to a report by the Ministry of Agriculture and Rural Development, in 2021, the rice cultivation area will decrease by about 39,000 hectares but the yield increased by nearly 190 kilos per hectare compared to 2020. The volume of rice exported in 2021 is equivalent to 2020, but the value was about $3.27 billion, up 4.8 per cent compared to last year.

KIS Vietnam Securities Joint Stock Company said the agricultural and fertiliser industries had a reciprocal relationship, so these results can be seen as a positive signal for domestic fertiliser companies.

Besides the advantages, fertiliser businesses will also face risks.

According to KIS Vietnam Securities Joint Stock Company, the Government may intervene in the selling price of fertiliser for rice which is considered an essential commodity, especially in the context of post-COVID-19 food shortage. The Government can issue regulations that force fertiliser companies to lower prices to support farmers.

From July 2021, under pressure from the skyrocketing fertiliser price, the Ministry of Industry and Trade requested the Viet Nam Oil and Gas Group to increase fertiliser reserves to ensure supply is not interrupted.