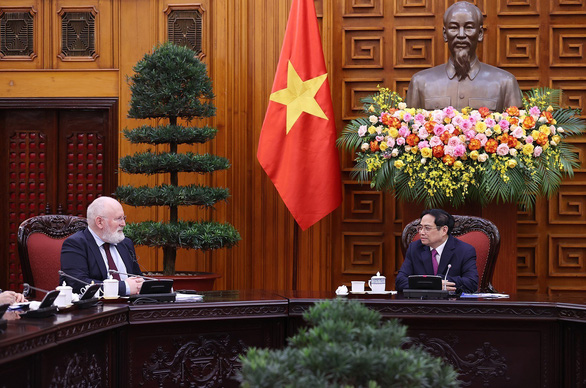 The European Union (EU) has announced a maximum grant of 210 million euros (US$238 million) as non-refundable aid for Vietnam for the 2021-24 period to consolidate and realize their bilateral cooperation in a number of prioritized areas.

The announcement was made during a three-day visit to Vietnam by Executive Vice President of the European Commission Frans Timmermans, starting on Thursday at the invitation of Vietnamese Deputy Prime Minister Le Van Thanh.

The visit was aimed at further discussing Vietnam’s commitments made at the 26th United Nations Climate Change Conference of the Parties (COP26) last year, as well as the EU’s possible support for Vietnam in its efforts to quickly reduce greenhouse gas emissions.

During his talks with Deputy PM Thanh on Friday, Timmermans affirmed that the EU attaches importance to its comprehensive partnership cooperation with Vietnam.

This $238 million aid is part of the Multiannual Indicative Program (MIP) that concretizes the cooperative relationship between the EU and Vietnam, enabling the two sides to work together on programs and projects built on common goals, principles, and values.

The aid is also intended to boost the EU’s cooperation with Vietnam in three priority areas including climate-responsive digital circular economy, responsible entrepreneurship and enhanced skills for decent employment, and strengthening governance, rule of law, and institutional reform.

He added that Vietnam has tremendous potential in the development of green, renewable energy and the two sides have recently discussed ways to apply European experience, expertise, and financial support to accelerate this transformation.

Currently, Vietnam is among the countries most vulnerable to climate change, and its Mekong Delta region, with a population of 20 million people, is subject to many risks such as land subsidence, extreme weather conditions, groundwater salinity, and sea level rise, Timmermans pointed out.

There is an urgent need for investment in climate resilience and adaptation to climate change, including nature-based solutions, he said.

Commenting on Vietnam’s commitments made by Prime Minister Pham Minh Chinh at COP26, Timmermans said the country has set an ambitious target to reduce net emissions to zero by 2050.

This important goal first requires new plans to be drawn up for coal-fired power projects without CO2 capture technology, while coal power production will be phased out, in line with Vietnam’s commitments to the Global Coal to Clean Power Transition Statement at COP26, the EU official stated.

During his Vietnam visit, Timmermans also met with PM Chinh, Minister of Natural Resources and Environment Tran Hong Ha, Minister of Industry and Trade Nguyen Hong Dien, Minister of Agriculture and Rural Development Le Minh Hoan, and some representatives of NGOs in Vietnam to discuss issues of mutual concerns.

Talking to the press on Saturday afternoon, Timmermans said his meetings with the Vietnamese officials showed that Vietnam is well aware of the importance of climate and environmental protection for sustainable and long-term development.

He added that the Southeast Asian country has achieved high economic growth in recent decades.

The EU is currently an important economic and development partner and the biggest non-refundable aid provider of Vietnam, according to the Vietnam News Agency.

It is also the country’s third-largest importer and sixth-largest investor.

Despite the impact of the COVID-19 pandemic, trade between Vietnam and the EU has reached $57 billion after 18 months of implementing the EU-Vietnam Free Trade Agreement (EVFTA), the agency reported.