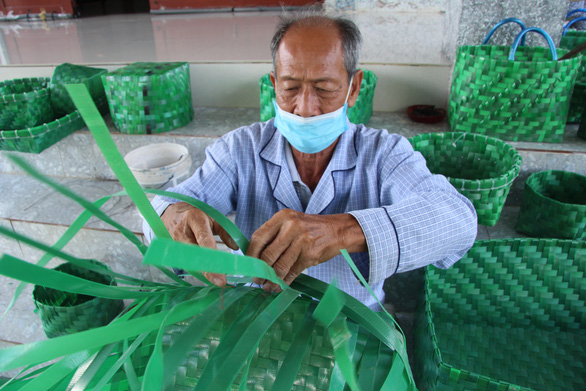 Nguyen Van Le showcases his dexterity in weaving stiff plastic straps into household items, with him using most of the earnings to buy essentials for the needy. Photo: Chi Cong / Tuoi Tre

Nguyen Van Le has been well known in the community in Kien Giang Province, southern Vietnam for weaving household items from stiff plastic strings for money to help the less fortunate over the past few years.

The 77-year-old man is fondly known as Bay Le in his neighborhood in Muong Chua Hamlet, Tay Yen A Commune, located in An Bien District.

Le may be old but he yearns to make as much of a social contribution as possible before his time runs out.

Despite his age, he has collected stiff plastic strands and flattened them with his hands before dexterously shaping them into household items including baskets, containers, and flower pots over the past three years.

The strenuous job constantly leaves his hands with painful blisters.

All of the earnings from these products provide the necessary funding for the operation of his charity work.

Weaving for others’ life

Le grew up in a large family who would make a living weaving rattan household containers, he said.

He is the only child in the family to pick up the trade and follow in his father’s footsteps.

“I first started weaving the items out of curiosity and have now mastered the craft after years of practice and patience,” Le revealed.

The man, however, did not turn to stiff plastic strands as his raw materials until 2019, when Tran Thi Mo, his sister-in-law, brought home piles of these from construction sites in Phu Quoc City, where she was working as a mason.

The strands are typically used to bind bricks, iron, and steel sheets at construction sites.

Trying his best to make full use of the strands his sister-in-law collected, Le put in his skills to turn the materials which would otherwise go to waste into useful stuff.

His very first pieces did not come out well.

With nothing to model his handicrafts on, Le encountered repeated failures in the early days.

His efforts and patience later paid off, and his true flair began to shine through.

His objects, ranging from bags, containers to flower pots, come in different sizes and shapes.

Le’s job is far from comfortable.

He cycles on a bumpy village road to reach construction works nearby to fetch the strings.

Though the road conditions have recently improved, the senior man still gets up at 5:00 am every day to avoid the scorching sun in coastal areas and cover several kilometers on his bike to the sites to collect the free materials.

On the day a Tuoi Tre (Youth) newspaper correspondent visited Le, he shared he had a good day as he did not need to travel far on the lookout for those with a free supply of stiff plastic strings.

“It’s quite taxing collecting the strings, but I find it heartwarming that people are sharing the supply with me,” Le said, adding some even take the trouble and carry the load to his front door absolutely for free.

The man said he buys rice for the impoverished with all the money he earns from selling the products.

To get the material ready, Le hammers the slippery strings before cutting them into sections of the right size.

Crafting a single item this way usually takes the elderly craftsman anywhere from several hours up to a whole day.

“I can create two to three smaller pieces a day,” he said, demonstrating his dexterity at the time.

The products have won over customers for their simplicity, environmental friendliness, and durability.

But they come with a price.

“My hands often hurt, but I’m glad that I can give rice to some of the neighborhood’s neediest by selling my handiwork,” Le noted.

As the crafts are eye-catching and durable, for Le creates a little touch to please the eyes in each of his pieces, orders have started coming in.

He has earned almost VND2 million ($88) from the sale for the past two months, with which he bought more than 500 kilograms of rice as gifts to the poor.

Nguyen Thi Man, head of Muong Chua Hamlet, Tay Yen A Commune in An Bien District, appreciates Le’s efforts in environmental conservation and his success with a material most people see as trash.

“Bay Le is a fixture around here. He’s resourceful and kind-hearted,” Man commented.

“He uses his earnings from crafting the household items and farming to buy rice for the underprivileged.”

Le’s products, which feature superior performance, design, durability, and craftsmanship, are increasingly used by people in many parts of the locality.

One of them is the double-layer flower pot, which is now in great demand.

Le shared growing up poor, he sees part of himself in the needy and cannot turn a blind eye to them.

As soon as he learned one of his neighbors, Do Van Phung, is in dire straits with a debilitating illness, Le wasted no time and gave Phung all the rice he had at that time.

“We’re really grateful to Le. The rice he gave us is heartwarming and is a boost to my brother’s morale,” Chin said.