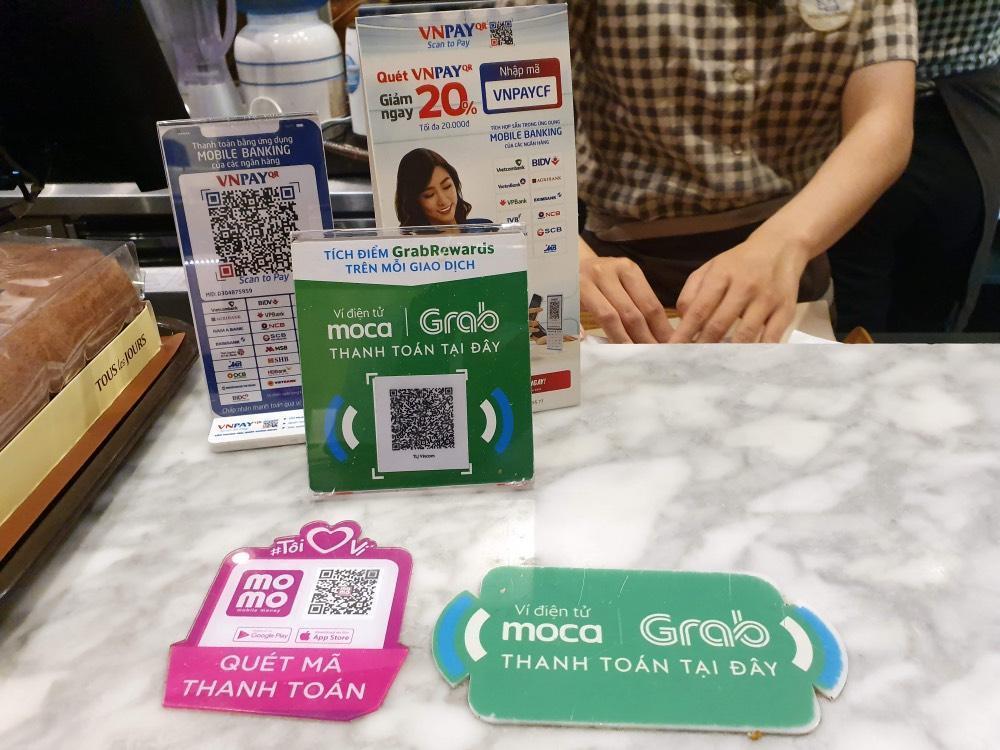 “Do you accept payment with MoMo?” “Yes” is the question one can hear at many restaurants and supermarkets in HCM City.

Life has become more comfortable for people as they don’t have to carry cash when going out or keep small change to make payments.

However, digital payments in general and e-wallets in particular are still not common in other provinces. And in HCM City, e-wallet users have to install Moca to take Grab and AirPay to shop on Shopee because e-wallets are not connected.

Most people cannot connect with e-wallets because of the limited number of Points of Sale, which are mostly located in large cities.

E-wallets and digital payment services have developed rapidly, especially during the Covid-19 pandemic.

A survey by Visa in the third quarter 2020 of 1,000 Vietnamese in urban and rural areas, of various ages, found that 51 percent said they had increased the frequency of using e-wallet. Fifty five percent said they made payments with QR Codes.

A report of Boston Consulting Group showed that 49 percent of bank clients in cities in Southeast Asia use e-wallets, and the figure is expected to reach 84 percent by 2025.

MoMo, which is leading in the number of users, had 25 million accounts, more than 100,000 POS (point of sale) and total transaction value by the end of 2020, up by 3.5 times compared with the year before.

Payoo has 20,000 POS nationwide, and deals with more than 400 types of bills and services from 350 providers. The platform connects 40 banks and has a transaction value growth rate of 60 percent per annum, with VND100 trillion treated via the system annually.

In Vietnam there are a high number of existing wallets and fragmentation. There are about 40 e-wallets for 97 million people.

MoMo, Moca and ZaloPay have advantages in payment at the counter. Moca holds Grab service booking. AirPay is the only e-wallet of the e-commerce platform with the highest number of users (Shopee). Payoo is a platform for making payment for services (water, electricity and internet).

Every e-wallet has its own advantages, but none is powerful enough to dominate the market.

As such, if people want to pay with e-wallets, they have to use at least 2-3 wallets for all basic daily services, from hailing and paying for services to shopping on marketplaces.

Nguyen Ba Diep, deputy chair of MoMo, believes that e-wallets will prosper in Vietnam in one or two years. By that time, only 3-5 wallets will exist.

Reports all show the sharp rise in smartphone users, about 20-30 percent per annum, especially for 5G smartphones. This is a great opportunity for development of e-wallets.

Nguyen Ba Diep of MoMo said that not only in Vietnam, but also in the world, the development of technology and fintech proceeds before the legal framework.

Concerns of management agencies about the possible negative impact that unprecedented new models may have on society are understandable.

However, he said the legal framework for fintechs needs to be more tolerant and acceptable.

Truong Cam Thanh, CEO of ZION, the owner of ZaloPay, proposed that the government set up an open mechanism for e-wallets to develop.

“There is no need to require e-wallets to have bank account connections. For wallets without connections, small-value transactions should be allowed. This would help clients access a new payment simple and convenient method, prompt people change their payment habits and give up cash payment,” she said.

Thanh predicted that new demands would appear in the near future, including post-paid service, peer-to-peer loans, credit loans, insurance and others. Therefore, it’s necessary to design sandboxes for businesses to try new products and services, and more effectively access users.

E-wallets in Vietnam have strongly benefited from the change in payment habits during the Covid-19 pandemic.

Vietnam intends to issue a new decree to regulate cross-border e-commerce deliveries amidst the e-commerce boom.