Vietnamese doctors had to spend 10 hours to transplant the lung of a brain-dead man into the thorax of another man, and then spent many months to maintain the lung and ensure his survival. 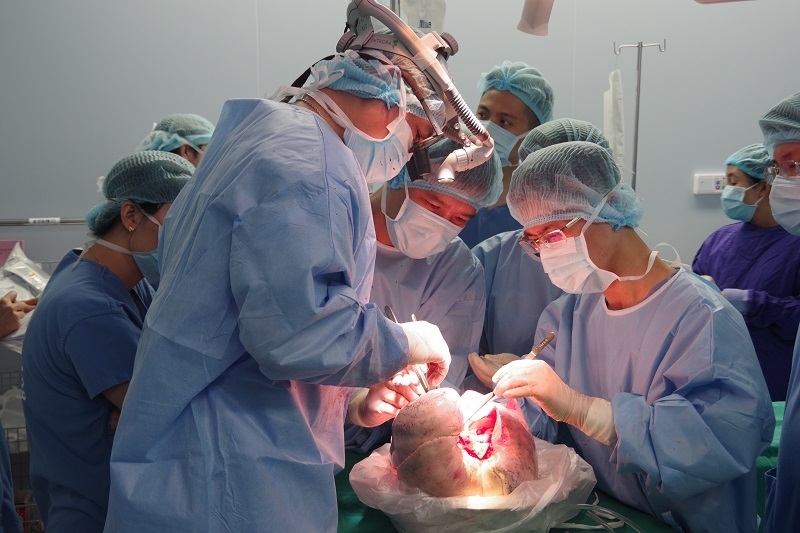 In October 2020, a woman who is a midwife, was seen sitting on a sickbed at Central Lung Hospital. The man on the bed was her son, a young engineer who was brain dead after a traffic accident.

The woman said she wanted to take a picture with her son before signing the document donating her son’s organs. The next day, the organs of the 31-year-old man would be used for transplants to save the lives of six other people.

For Dinh Van Luong, Deputy Director of the Central Lung Hospital, the major surgeon in the lung transplant case, it was an unforgettable scene.

After 1.5 years, on February 27, 2022, Luong received a call from N.X.T, the patient in the lung transplant case, from Thanh Hoa. Congratulating Luong on the occasion of the Vietnamese Doctors’ Day, he said he was exercising and riding bicycle.

“Thanks to doctors, I was born a second time,” the man said.

Lying said that lung transplantation is one of the most difficult organ transplant techniques. Prior to that, in Vietnam, there were lung transplant cases from brain-dead donors but the success rate was not high as the recipients lived only a short time after the surgery.

The list of patients waiting for lung transplant was getting longer and longer. One of the patients was N.X.T, 54, from Thanh Hoa, who suffered from pulmonary fibrosis. His situation worsened very quickly with signs of respiratory failure and he would have lived for two more months if the transplantation had not been implemented.

The surgeons of the Central Lung Hospital had to prepare for the operation for many years. In 2018, Luong and his colleagues were sent to UCSF, the biggest lung transplant center in the US, to learn the transplant technique.

After the study, the group of surgeons returned to the hospital and built up a process for lung transplant surgery in Vietnam.

On Thursday morning, the surgeons completed the draft of a detailed scenario of the surgery. On Friday afternoon, they received the news that there was a brain-dead man at Vietnam-Germany Friendship Hospital.

“It was raining and cold that night,” Luong recalled. “Doctors Ngoc and Nghia and me, the surgeons who studied in the US, came to meet the mother of the brain-dead engineer. The mother cried and agreed to donate her son’s organs. The woman asked to be photographed with her son for the first time. And this was done at 11.30pm.”

After that, doctors had to pump oxygen to the body to protect the lungs. When the lungs are protected, other organs, including the kidney and liver, are also protected.

At 6am, the young engineer was brought to the Military Hospital 108 where the transplantation surgery was implemented.

“The patient still had to breathe with a ventilator to protect the organs. The man died, but the organs were still alive,” Luong explained.

“We were like in a big battle. The entire board of directors and a system of more than 10 surgery rooms were activated. His hands, kidney and liver were transplanted at Hospital 108, and his heart at the Vietnam-Germany Friendship Hospital,” Luong said

The surgery was successful after 10 hours. However, another challenge came after that – keeping the lung in the thorax of the recipient, which Luong said was “another battle”.

Just two days after the lung transplant, the patient could get up and began taking physical exercises for rehabilitation.

After one month, the patient was brought back to the Central Lung Hospital. One month later, he could receive outpatient treatment. He lived in a rented room near the hospital.

“We had to make the environment clean before the patient moved into the rented room,” he recalled.

“At that time, vaccines were scarce. But we still had to vaccinate his family members as well to avoid infecting the patient,” he said. “Some weeks ago, he contracted Covid-19 and he was also treated in accordance with the standard process. He is well now.”

This is the most successful lung transplant case in Vietnam and the patient has had the longest post-transplant survival period.

“Globally, there are some patients who can live 20 more years after transplant surgery and we are striving for this goal,” he said.

Nguyen Viet Nhung, Director of the Central Lung Hospital, said lung transplant is one of the most difficult organ transplant techniques.

“The success of the case shows that Vietnam can approach high techniques in lung transplantation,” he said.

The transplant surgery was one of the most memorable moments in the life of Doctor Dinh Van Luong. He has carried out many surgery cases in the last 30 years, but this was the most touching case in his life.

For the first time Vietnamese doctors at Cho Ray hospital in HCM City have successfully conducted a renal transplant with a kidney taken from a relative who has a different blood group.

Nam’s arms were amputated at the age of 15 due to a chemical accident. In front of the boy’s eyes, all the doors to the future closed. That was four years ago, and his life has now turned a new page.