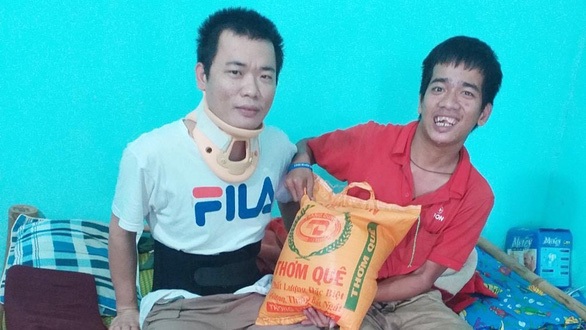 Quang Dinh Hau (right) gifts a pack of rice to Vo Van Vu, who was bedbound for several years due to his severe spinal cord condition, and helps him heal. Photo: H.D. / Tuoi Tre

Quang Dinh Hau triumphs over his own physical disability and tries to make the world a little better place to live.

Thirty-year-old Hau, a resident of Tu Cung Village, Tinh Khe Commune in Quang Ngai City, the capital city of the namesake central province, drives his motorcycle modified for his physical disability around the neighborhood every day providing the needy with food and essentials with the money he raises.

His charity journeys sometimes take him to Phu Yen and Quang Nam Provinces, approximately 290 and 138 kilometers from Quang Ngai, respectively.

As many people were furloughed, ending up hopeless and even homeless due the COVID-19 pandemic, Hau raised funds to give them much-needed support and encouragement.

Though Hau has difficulty walking and speaks with a lisp, he has spent the past years asking his neighbors for donations and distributing handouts to people in need.

The idea behind his work is not only to provide food and necessities, but also a pleasant atmosphere and encouragement for those desperate for both financial and emotional support.

Many find it heartwarming that Hau is sharing with others so they are willing to donate, however small it is, whenever he trudges into a café or any crowded place with his donation box.

Duy, a local resident, said he always donates the equivalent of a few U.S. dollars to Hau whenever the physically challenged man comes to him.

“Hau acts as a bridge. Through him, I can help someone out there who needs food and other assistance,” Duy said.

He gladly showed a plastic bag with a load of small-denomination bills inside.

Painstakingly constructing his words, the man said twice he was going to give the collected money to poor people very soon.

The diners at the eatery also gave some donations to Hau, who mumbled an awkward thank-you.

Hau’s life has never been easy and his childhood was a series of adversities.

He was born with serious birth defects into a poor family in Tu Cung Village, which witnessed the mass murder of 504 unarmed civilians by U.S. troops in Son Tinh District on March 16, 1968 during the war in Vietnam.

The misfortune of his childhood continued as his parents got divorced and his father later remarried, so the disabled boy grew up with his paternal grandmother.

The teenager soon found himself selling lottery tickets and begging, struggling to provide for himself and his elderly grandmother.

When his ailing grandmother came to live with her other child, Hau began fending for himself through adolescence and early youth.

Whatever life throws at him, the physically challenged man still stands firm on and is able to earn enough cash to afford food and other necessities, not only for himself but also for others who are in a more difficult circumstance.

Hau now spends his days rolling through the streets in Quang Ngai City on his tricycle, constantly on the lookout for anyone who might want to buy the lottery tickets he sells to make ends meet.

Aware of his circumstances, many locals have become his regular customers and tell him to keep the change or even give him extra money.

The man does not keep the money for himself but he uses it to help those in need.

He delivers his gifts, which may be low in material value but are filled with humanity and sympathy, directly to poverty-stricken people no matter how far they are from his home.

“I distribute gifts to needy people in the same way the better-off give me money out of compassion,” Hau confided.

The man never ceases to amaze anyone in conversation with him.

Despite his difficulties, he is always a good-natured man who gives his heart and soul to the cause.

“One must have something to lean on and a goal to strive for in life. I’m happy I can help someone,” Hau shared.

“This way I feel I’m more blessed than many as I’m still mobile while they are bedbound and unable to do most daily activities without assistance.”

Hau proudly shared photos and videos of his charity trips during which he endeared himself to disadvantaged strangers by relieving their difficulties and helping lift their spirits.

The man also tries to take away sorrows and give back love and positive energy to those he meets.

Among them is Vo Van Vu, from Tinh Khe Commune, Quang Ngai City.

Vu has a serious spinal cord condition which has caused him to lose the ability to walk and left him bedbound for several years.

Two of his family members also suffer from the same condition so they are heavily dependent on Vu’s younger sister.

The miserable life led Vu to contemplate suicide more than once.

It was during Vu’s darkest moments that Hau entered his life, showering him with encouragement and some hope for a brighter future.

“Following Hau’s many visits, I begin to see light at the end of the tunnel and make one effort after another,” Vu said, adding he can now walk on his own.

“Hau never minds vicious stares or comments on his disability when he tries to raise funds,” Tho noted.

“He sets such a good example.”

Many are also appreciative of Hau’s efforts in raising funds as a way to help those struggling due to the COVID-19 pandemic and frontline workers during the virus outbreak in the province in mid-2021.

One of these stories can be seen on the Facebook page of Major Ho Hoang An, of the Quang Ngai City Department of Public Security.

According to Major An’s account, Hau insisted his team receive some gifts from his fund in July 2021.

“We are really moved by his good deed,” said Major An.

Hau is also active in raising local awareness of how to curb the spread of the coronavirus and collecting vegetables and money from farmers and market stall owners to help needy residents in Ho Chi Minh City around August 2021, when the southern metropolis, the country’s epicenter then, was put under lockdown at different levels.

Nguyen Thanh Thong, deputy chairman of the Vietnam Fatherland Front Committee in Binh Son District, said he was deeply moved when Hau carried 10 boxes of instant noodles on his tricycle to his organization to hand out to impoverished people.

“That man’s physical condition cannot stop him from reaching out to others,” Thong remarked.