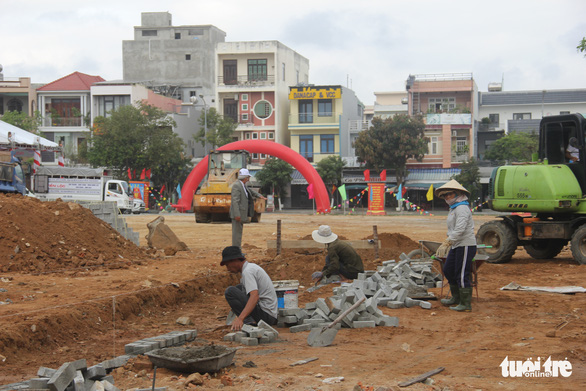 Authorities in Da Nang, a coastal city in central Vietnam, have kicked off the construction of a park adjacent to Hoa Vang Cemetery, regarded as the country’s first martyrs’ burial ground, on Friday to make it a spiritual tourist destination for visitors.

The park, located on an area of over 6,000 square meters outside the cemetery, will be built within three months at a cost of around VND10 billion (US$440,000) from the city’s budget.

The construction site is made available after the Traditional Medicine Hospital was relocated from the area previously.

The cemetery is the resting place of over 1,000 soldiers and civilians who sacrificed their lives in Vietnam’s struggle against French colonialists in 1858-1860, local authorities said.

A national relic site, it is part of the Khue Trung Historical and Cultural Relic Area in Cam Le District.

As a spiritual and cultural work connected to the cemetery, the park will include a ceremonial yard, a memory garden, a greenery area with fountains, and a lighting system.

It will also consist of a parking lot, a fencing wall, and other components.

Upon completion, the park will be a venue for the public to pay tribute to those who lost their lives for the nation’s resistance against French colonialists, said Ho Van Khoa, chairman of the district’s administration.

He also stated that the new facility would not only help preserve and promote the traditional cultural values but also become a spiritual tourist destination for travelers.

“The cemetery, the first for martyrs in the country, is the place that honors the heroic mettle of the soldiers who have fallen for the fatherland,” Khoa said.

The park together with the cemetery will become a venue for conducting traditional educational activities for younger generations, the official added.

“In the spirit of ‘when you drink water, think of its source,’ the construction of the park demonstrates our gratitude to those who sacrificed themselves for our independence and freedom,” said Le Trung Chinh, chairman of the Da Nang People’s Committee.