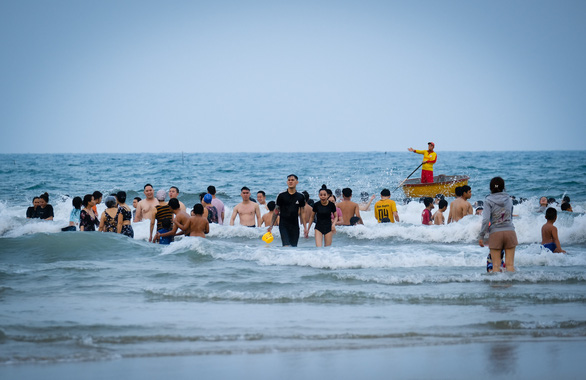 A lifeguard stands in a basket boat around tourists’ swimming area in Da Nang to observe the situation and be able to save the drowning people in time. Photo: Tan Luc / Tuoi Tre

Despite the dangers inherent in the job, a rescue team in Da Nang has dedicated the last 16 years to saving thousands of people swimming in the coastal city.

Their dedication was proved last March when the team rescued five tourists from drowning.

One day at 7:00 pm, it was getting dark at My Khe Beach in Da Nang, located on the central coast of Vietnam, and people swimming in the sea gradually departed.

Nguyen Huu Toan Chung, a lifeguard, carried the surfboards and lifebuoys to the beach and changed his clothes at the end of a long shift.

However, Chung did not immediately leave that day because one of his teammates working at the parking lot called him back for a brief conversation.

As a result, 30 minutes later, he averted a tragic disaster for Da Nang’s tourism industry.

At the moment of life and death

March 27, 2021, was a joyous day for Da Nang, with numerous events commemorating the return of international visitors, including the reopening of air routes to Thailand and Singapore, and the beach was packed with people welcoming a hot-air balloon festival adjacent to APEC Park.

As a result, the beach was busier and more crowded than usual, a positive sign for the tourism industry.

However, without Chung’s timely appearance, the tourism city’s bustling event could have been overshadowed by the drowning of five tourists.

As a rule, at 6:30 pm, the beach lifeguards would announce that the rescue shift was complete and that tourists could proceed ashore.

However, a group of six youngsters traveling from a northern province arrived late that day.

At 7:00 pm, four of them went swimming in the sea for a while before being swept away by strong currents and hardly making an attempt to call for assistance.

While the girl on the shore panicked and ran for help, another person, L.D.D, bravely rushed into the water to rescue his friends but sank along with them.

Chung, who was sitting and drinking water in the nearby parking lot, immediately grabbed a surfboard and lifebuoy and ran straight to the sea when he heard the cry for help.

After battling rough sea waves in the dark, Chung successfully rescued the four tourists by telling them to cling to the surfboard and lifebuoy, and then attempting to bring them to the seashore.

Because the victims were already exhausted, Chung had to hold their hands as he pulled them in.

After managing to reunite those four people, a girl from their group stated that there was still one more missing person, L.D.D, who tried to rescue their friends.

Chung rushed out and tried to search the entire area again. However, at this point, D. could not be found.

Later that night, the corpse of D. washed up on the beach. Even though the outcome was not perfect, Chung’s best effort saved the lives of four tourists.

A delay of just one or two minutes could have resulted in a very different outcome in that life-or-death situation.

Other members of the rescue crew said that if Chung had returned home immediately following his shift that day, a disaster would have happened.

Da Nang has been attracting a large number of tourists due to its beautiful beaches that stretch tens of kilometers.

However, few people realize that in order to keep visitors safe and to promote an ideal image of Da Nang beach tourism, approximately 100 lifeguards are stationed throughout the beaches to protect vacationers from dawn to dusk each day.

When the number of people swimming in the sea gradually increases, the rescue crew will send out a jet ski driver to keep an eye on the tourists, remind them not to swim too far, and ensure that they are able to rescue exhausted people as well.

According to Dinh Van Luong, 46, the oldest lifeguard in the Da Nang rescue team, the squad usually releases the floats in a safe area that does not contain any dangerous deep holes, allowing everyone to swim safely.

“It is advantageous for rescue work. However, occasionally, a few tourists will deliberately swim across the safe zone,” Luong confided.

“At such times, we will immediately warn them and the majority of tourists often cooperate with us in swimming back.

“However, there are numerous people who scold us.

“We’re concerned about their safety, but we’re also frustrated when they don’t recognize our good intentions.”

The team has saved a large number of people over the course of his more than two decades in rescue work, Luong said.

No one bothers to track their accomplishments on a daily basis after they return home because the team members regard saving lives as a duty.

After a two-year suspension due to the COVID-19 pandemic, members of the Da Nang beach rescue crew are delighted to see tourists returning in large numbers on a daily basis.

However, joy comes with concern; the more tourists, the more difficult the rescue operation becomes.

Whenever the beaches are crowded with visitors in the early morning or late afternoon, rescuers must strain their eyes, listen attentively, and observe carefully in order to respond promptly when an incident occurs.

Luong stated that everyone involved in rescue operations is aware that this is a dangerous job.

If they are careless or show even a moment of neglect, they may become victims and all may eventually die together, as the drowning person will tightly hug anything they can grasp in panic.

According to Luong, the lifeguard must maintain a calm demeanor in all situations in addition to mastering the lesson.

According to the management of Son Tra Peninsula and Da Nang tourist beaches, the crew has safely rescued 1,750 visitors over a 16-year period beginning in 2006.

Speaking about Nguyen Huu Toan Chung’s achievement of saving four people that night, Nguyen Duc Vu, the management’s head, stated that he had already rewarded Chung and formally recognized his feat as a basis for an early salary increase.

Nguyen Quoc Vinh, captain of the rescue crew, said that their rescue force consists of approximately 100 members spread throughout the beaches, from Ngu Hanh Son to Son Tra to Thanh Khe and Lien Chieu Districts.

According to Vinh, beach rescue work is extremely difficult and dangerous; rescuers must rise early between 4:00 to 5:00 am and work until late at night, regardless of the weather.

However, many of them earn a pittance; on average, lifeguards make VND5-6 million (US$217-261) per month, rendering it difficult to make ends meet.