Editor
2 / 100
Powered by Rank Math SEO
The COVID-19-hit rental real estate market is bouncing back from hibernation as the successful vaccination campaign nationwide has allowed the reopening of economic activities, pushing up demand. 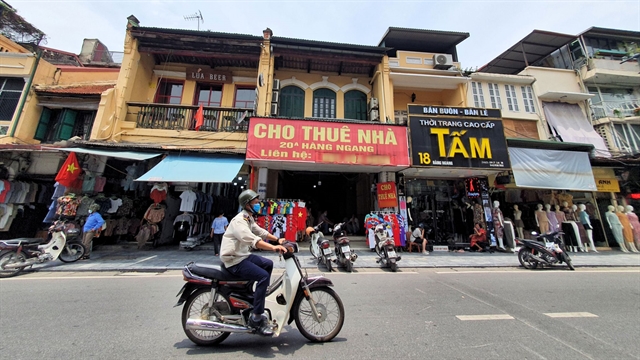 The rental property market was improving along with the reopening of economic activities. — Photo vietnambiz.vn

The market saw increases in the number of listings and searches for rental properties in recent months.For more than two years, the rental market fell into hibernation due to the impacts of the COVID-19 pandemic with social distancing measures in place to fight the spread of the virus.However, from the beginning of this year, the successful vaccination campaign allowed the reopening of economic activities with people returning to work, stores and restaurants reopened and the roads crowded again.Ngô Mạnh, a broker in Hanoi, said there was a significant increase in the number of searches for spaces to open restaurants, cafes, drugstores, supermarkets, stores and bank branches, especially in downtown areas.A recent report of real estate portal batdongsan.com.vn showed that searches for offices for lease in HCM City rose by 32 per cent in February against the previous month, apartments by 53 per cent, private houses by more than 80 per cent and town houses by around 32 per cent.Rents remained at low level but were starting to inch up, the report found.Notably, searches for cheap rooms for lease in the southern city jumped by 142 per centIn Hanoi, searches for rental rooms increased by 237 per cent, private houses by 77 per cent, apartments by 73 per cent and offices by 17 per cent.Trần Khánh Quang, a property expert, said that when the economy recovered, the rental property market would also bounce back. He projected that the rental market would be robust from the second quarter of this year.According to David Jackson, CEO of Colliers International in Vietnam, along with the economic recovery, the rental demand was increasing. Many landlords were still offering discounts averaging 10-15 per cent compared to pre-pandemic times, he said, stressing that it was good time to look for rental properties as rents were still relatively cheap and there were a number of choices now.If the pandemic continued to be under control and did not cause any considerable negative impacts, the rental market would bounce back to the pre-pandemic level in a few months, he said.Regarding the segment of rental departments, Mattew Powell, Director of Savills Hanoi, predicted an improvement in the rental housing market as the country reopened international flights, pushing up demand for rental homes from foreigners.This segment was also on a positive trend as the foreign direct investment (FDI) flow into Vietnam increased significantly in the first quarter of this year which means more foreigners would come to Vietnam to work, he said.The latest updates of the General Statistics Office showed that disbursed FDI totalled US$4.42 billion in the first three months of this year, up by 7.8 per cent against the same period last year.The segment of offices for lease was also robust.According to Knight Frank Vietnam, commercial property in HCM City was recoverying strongly to pre-pandemic levels, with the occupancy rate of more than 90 per cent.The property asset management company expected rents would increase by 15-20 per cent by the end of 2023.The Vietnamese economy expanded at 5.03 per cent in the first quarter of this year against the same period last year. The Government set the target of reaching a GDP growth rate of 6.5 per cent for the full year.Source: Dtinews