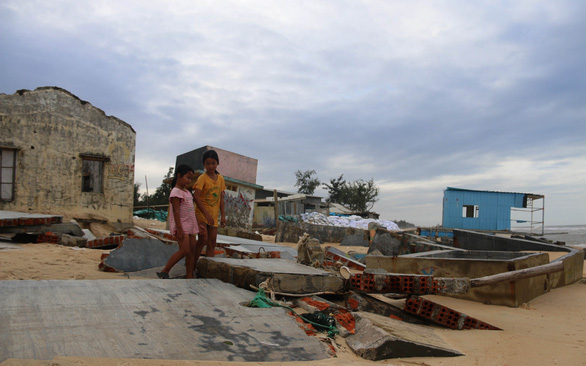 Swathes of land on the shoreline of a fishing village in central Vietnam have vanished after about two decades due to marine abrasion, threatening the livelihoods and shelters of a populace of thousands of people.

“The oceans eat up a chunk of our land every year,” said Huynh Luu, 55, a veteran fisherman in Ghenh Village of Phu Thuan Commune in Thua Thien-Hue Province.

Despite having spent decades making a living on the ocean, Luu said the erosive sea waves have managed to invoke a new kind of fear in him.

“Provincial officials said something along the lines of coastal erosion and climate change — I don’t even know,” he complained.

“The only thing I know is that the shoreline, once hundreds of meters away from my house, has now reached very close.”

During the tail-end of autumn, the neighborhoods of Ghenh Village are pervaded with a vast silence as the men in town all head offshore to catch the seasonal influx of Bombay duck fish.

Among the women that stay in the village, Ho Thi Cam is occupied taking care of her four children in a makeshift shelter, formerly an office building for an aquaculture breeding company.

As she suggested, the family was forced to relocate here after their coastal house had been chewed up in a recent bout of land loss.

“We lost our house and couldn’t afford any other shelter, so we have to live here,” Cam said.

“This hatchery company building was also abandoned due to erosion, as it destroyed the shrimp and crab cages they had built.

“My family has yet to be safe here, considering the erosion has approached the shelter.

Located right behind her shack is a dilapidated complex with concrete beams crumbling into the sea.

Once a service facility bustling with tourists, the area closed down after sea waves eroded the building foundations, causing many employees to leave the area to seek other jobs.

In light of the situation, local officials have launched efforts to push back the erosion, but the current resolution, a makeshift dyke with sandbags held in place by frail-looking wood beams, does not seem like it will work in the long term.

Not too long ago, Cam’s family could still take a walk on a coastal road a few footsteps away from her house.

But as erosion inches inland every year, leaving the road to slowly sink into the ocean. Now, the area is a temporary fishing port.

It was early in the season for Bombay duck fish, so the harvest was scarce, said Huynh Luu as he folded his net on the port after a voyage.

With fuel cost deducted, each member in his crew made a few hundred thousand Vietnamese dong (VND100,000 = US$4.4) after that trip, a rather underwhelming figure for the time they spent.

According to Luu, the fisherman workforce in his village has significantly thinned out over the past years due to the rise of unfavorable weather phenomena.

“Part of it was caused by land collapse as well, as it threatened our safety during bouts of rough seas,” he said.

“Youths in our village would rather seek jobs elsewhere than stick with the arduous fishing job like their parents do.”

Luu reminisced about the golden era of the village, about fifteen years ago. The area was filled with electric lights and friends chatting, the air brimming with hope.

“Summer was the best time there, as local seafood stalls were packed with tourist groups from big cities,” he recalled.

“Those days are long gone, all due to the marine abrasion.”

For Luu’s neighbor Le Chut, 57, the future of the village was once bright as well.

Once his fishing job seemed lucrative, he is now fraught with anxieties, one of which is the prospect of losing his house to erosion becoming more and more likely as the ocean encroaches on the shoreline.

According to Chut, the local government has campaigned to relocate the village to a safer area, a plan that was sound to all but some, including him.

Because of unsettled deals for land compensation, coupled with concerns of losing their marine livelihoods, Chut and a handful of Ghenh villagers have yet to leave the area despite facing precariousness on a daily basis.

The commune has so far embanked only one kilometer of its coast, leaving four kilometers of the shoreline vulnerable to damaging sea waves, threatening the safety of 500 local households.

“Local authorities have relocated some households in vulnerable areas to new shelters, but we are also planning to build anti-erosion dykes along the shore to help local residents stay with their fishing livelihoods,” Tuy said.

History logs suggested that the coastline in Phu Thuan has moved some 300 meters landward since 1975, according to Phan Thanh Hung, deputy head of the Steering Committee for Natural Disaster Prevention and Control in Thua Thien-Hue Province.

Scientists deduced that the province lost 45 hectares of land in the period, and the erosion rate is picking up after a historic flood in 1999, Hung added.

In an effort against erosion, local leaders are suggesting a VND1.33 trillion ($60.3 million) embankment project to consolidate shore areas in peril.

“We are also mulling over other measures to push back land collapse, including the dredging of canals and river inlets, planting of protection forests, and evacuation of vulnerable households,” Hung stated.

Erosion is affecting 12.4 kilometers of shorelines in various coastal districts of Thua Thien-Hue, jeopardizing 1,500 households and opening up risks of new river inlets, a situation that took place during the 1999 flood.

Most impacted areas report coastline shrinkage at 3-7 meters per year, a rate that may disrupt the ecosystem of Tam Giang Lagoon — the largest brackish water lagoon in Southeast Asia.