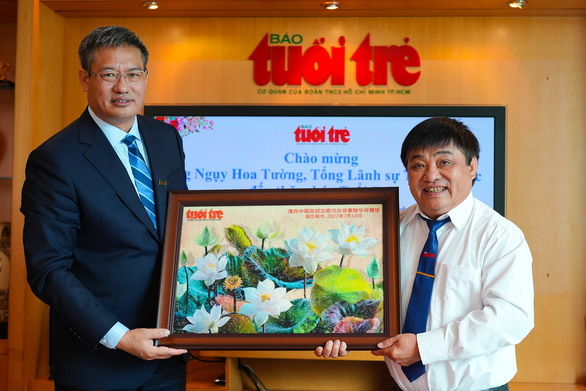 During a meeting at the office, Le The Chu, Tuoi Tre’s Editor-in-Chief, congratulated Chinese Consul General Wei Huaxiang on his new appointment and wished him the best during his tenure in the southern hub.

The chief editor emphasized that many readers are interested in studying, traveling, and doing business in China.

He hoped that the positive outcomes achieved in the relations between Vietnam and China in the past would continue to be strengthened in the coming time.

“We also expect that with the experience and position of Chinese Consul General in Ho Chi Minh City, Mr. Wei Huaxiang would be able to enhance the connection between Vietnam and China, as well as the development of Ho Chi Minh City,” Chu said during the meeting.

The diplomat said that he has been in Vietnam for approximately 50 days as a consul general.

This is also his first visit to the southern city.

He hoped that Tuoi Tre may serve as a bridge to strengthen the friendship and optimism among citizens of the two nations.

During the meeting, Consul General Wei made a number of suggestions to the Tuoi Tre leader for the promotion of exchange and studying activities between the two peoples, especially the younger generations.

Chief editor Chu believed that the exchange activities among young people from the two nations would contribute to the improvement of the Vietnam-China relations.

He stated that Tuoi Tre is willing to serve as a gateway for information exchange and bilateral tie building activities.